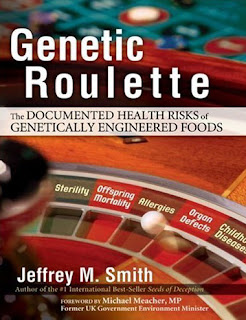 A few years ago, I thought genetically engineered plants weren't much different from plants that had been crossbred, e.g. cross a white rose with a red rose, get a pink rose. I was naive.

Jeffrey Smith, author of Seeds of Deception and Genetic Roulette, describes the process that leads to genetic modification as unpredictable:

"Gene insertion is done either by shooting genes from a "gene gun" into a plate of cells or by using bacteria to invade the cell with foreign DNA. The altered cell is then cloned into a plant. These processes create massive collateral damage, causing mutations in hundreds or thousands of locations throughout the plant’s DNA. Natural genes can be deleted or permanently turned on or off, and hundreds may change their levels of expression."

Forgive me for my candor, but this sounds like a crapshoot.

"Genetic engineering transfers genes across natural species barriers, using imprecise laboratory techniques that bear no resemblance to natural breeding. Furthermore, the technology is based on outdated concepts of how genes and cells work."

I envisioned a more delicate operation. Where's the science? What's the hurry? If we're going to be eating (truth is, we are eating) corn and soy with DNA that has been blasted with a "gene gun," shouldn't there be some human safety trials?

Even when biotech firms succeed in creating seed with a desired trait:It's a foreboding fact that soy allergies skyrocketed in the United Kingdom after GM soy was introduced.

It would be nice to advance this conversation beyond conspiracy theories and political rhetoric.
________
Posted by Bix at 6:55 AM