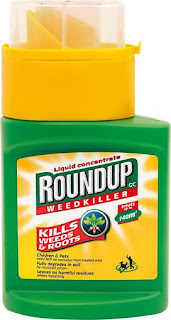 This is fresh news...

One reason companies like Monsanto promote their genetically modified seed is that it's designed to be used with herbicides they also sell, such as the herbicide Roundup. (Thus "Roundup Ready" seed.)

Since the crops have been genetically modified to resist damage from the herbicide, more of it can be used. In fact, GM crops have been shown to be contaminated with higher levels of herbicides than conventional crops.

Are those herbicides safe to consume?

"The proprietary mixtures available on the market could cause cell damage and even death around residual levels to be expected, especially in food and feed derived from Round-up formulation-treated crops."

From their press release:

"In this research, the formulations were diluted at minimal doses (up to 100,000 times or more) and they programmed cell death in a few hours in a cumulative manner. We also noted membrane and DNA damages, and found that the formulations inhibit cell respiration."

They used very diluted doses of the herbicide, such that "they were not herbicides anymore." The residues still damaged and killed cells.

Of note: Something that "inhibits cell respiration" slows the action of mitochondria, which is where, in our cells, we manufacture energy (in the form of ATP). Feeling tired? It may be the amount of Roundup residues on your GM soy foods.

Here's a strong statement from authors of a research paper:

"The rules apply to glyphosate whatever its formulation may be, this is wrong."

The authors contend that safety guidelines are based on the active ingredient (glyphosate) alone. Their investigation found that chemicals glyphosate is mixed with amplify its action and make it more toxic. (I never hear the word "wrong." There must be emotion behind it.)