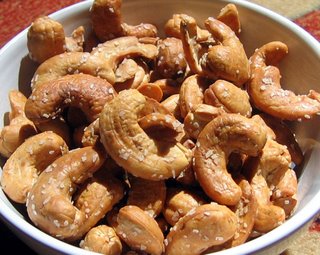 There's nothing like the taste of a freshly roasted cashew. Why is it, among nuts, cashews alone develop that caramelly come-hither aroma? Could it be their higher starch content?

While I'm talking nutrition content, cashews also have the least fat among the nuts listed, 12.4g per ounce. Calories in an ounce, about 160.

More starch would contribute to the Maillard reaction - a browning reaction involving an amino acid (protein) and a reducing sugar (carbohydrate), macronutrients which cashews have in about equal amounts.

The Maillard reaction is also responsible for the coveted crust on bread, and the color and taste of coffee, chocolate, and beer. Curiously, although it operates in the production of milk-based caramels, the Maillard reaction is not the same as caramelization. Wikipedia calls its resultant products "interesting but poorly characterized odor and flavour molecules." I can attest to the "poorly characterized" part. In food lab, when we were obliged to list sensory traits of cooking/cooked foods, people were sometimes at a loss for adjectives. Mostly you heard, in reference to a bread crust or heated milk item, "Mmmmmm, it's the Maillard reaction".

It took some experimentation before I settled with this recipe. I didn't want to add oil. Although it would conduct heat more evenly around the nut, giving it a uniformly distributed glow and helping the salt to stick, it would also slightly increase the fat content of some naturally fatty fare. Oils add their own flavor too, either from the food they were pressed or from rancidity. I didn't want to muddle the cashew taste. (I would venture the taste of some store-bought cashews owe at least a little to the oxidation of the fat they were cooked in.) So I dry roasted, replacing the oil with a little water.

Ingredients
~~~~~~
1   Marinate cashews - Combine raw cashews, water, and about 1/2 tsp. salt in a bowl. Use enough water to coat the cashews, but not so much that it pools in the bottom of the bowl. Stir periodically for 5 or 6 hours to distribute the salted water and assist evaporation.

Note: Raw cashews are not actually raw. They're heat-treated to remove the shell 1, a thin skin, and some liquid inside the shell. The liquid contains urushiol, the same irritant found in poison-ivy, and can cause painful blisters. Some refer to the cashew as the "blister nut".

3   When the cashews are almost dry - but still damp so the salt sticks - stir in about 1/4 tsp. kosher salt. (Salt to your preference. Saltaholic that I am, I probably use about 1/2 tsp. here and 1/2 tsp. to marinate.) Spread the nuts in an even layer on a cookie sheet. Roast for 15 minutes at 285ºF, stir, then roast for about 15 minutes more. Depending on the size of your nuts, browning may begin midway into the 2nd 15 minutes, so be on the look-out. They can go from a light amber (like a pilsner*) to much darker (like a brown ale*) in a matter of minutes.

Note - Try not to dawdle when you open the oven to stir. You don't want to lose so much heat that the oven stays on for a while to recover. My experience has been that a hotter oven will result in a spotted nut, instead of one evenly browned.

4   Remove from oven. Let cool completely on the pan. Refrigerate once cool. 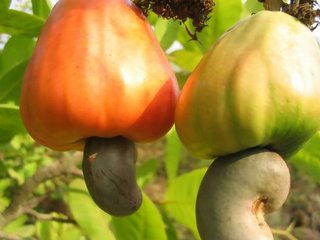 1 This post was a real education for me. The cashew nut, or what we call a nut but botanists call a seed, is inside that kidney-shaped drupe hanging off the bottom of the pear-shaped fruit, rather, pseudofruit. The real fruit is the drupe. The pear-shaped fake fruit, known as the cashew apple, is pretty bitter but makes a delectable jam I hear.

The great photo is from tetatate's moblog.
________
Photo of dry-roasted cashews: Homegrown
Posted by Bix at 8:42 AM

Anonymous, kind of you, thank you. It's been years since I posted this but I still make them. Coincidentally, I made some yesterday. The way I do it hasn't changed much since this post, except I turn the oven down to about 270 now. And I use a little less salt (not willingly).

By accident I ended up marinating my nuts for about twelve hours as I fell asleep on the couch last night. Even though the result was splendid. I fried them in the oven on 135 celsius for about 40 minutes. Stirring occasionally.

I did, by the way not go easy on the Maldon salt :)

The marinating teqnique is far better than other recipes I've tried earlier, most including boiling of the nuts.
For nut lovers it's also very nice to emphasise that cashew contain many vital vitamins that are difficult to obtain from other foods.

Thanks for a fine article.

Aw, made my morning. Thank you!

Thank you for sharing your recipe! We just made these and came out very tasty!! Love them. ;)

Just made my cashews using your recipe. Came out perfect. Thank you for posting!

Terrific recipe for raw cashews. I made mines using your recipe and it tasted great. Thank you for posting.

My nuts are quite large, but the cashews still took only about 25 minutes to brown.