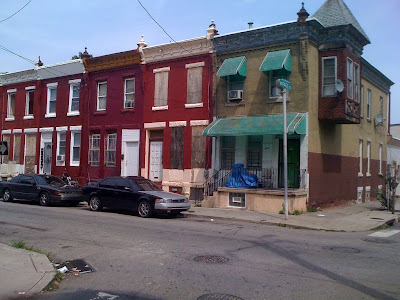 A new report by the non-profit Foundation for Child Development:
2010 Child Well-Being Index

"The percentage of children living below the poverty line is expected to peak at 21 percent in 2010, the highest rate of child poverty in 20 years. We estimate that approximately 15.6 million children will be living in poverty in 2010."

"We project the percent of children living in food-insecure households to climb from 16.9 percent in 2007 to 17.7 percent in 2010, which is an increase of 750,000 additional children at risk over this time period. (Food insecurity occurs when all family members do not at all times have access to sufficient, safe, and nutritious food to maintain an active and healthy life.)"

"Chief among the findings is that, by 2010, the recession will wipe out virtually all progress made for children in the Family Economic Well-being Domain since 1975."

That's 21% of US children living below the poverty line and nearly 18% living without a secure source of food. Those are astounding numbers given that the US is the world's richest economy. Say what you may about adults living in poverty, but children have no control over the family into which they're born.

Consider the 1% of people in this country who clamor about raw milk against a backdrop of 18% of children whose access to food at all is uncertain, and who barely have a voice.
________
The photo is of a section of Philadelphia called Strawberry Mansion, taken by the author of the blog Many Miles; I believe his name is Martin. The specific post was Urban Poverty and the Ugly Animal.

About a quarter of the people here in Philly live below the poverty line, in neighborhoods much like this. They don't have access to supermarkets, let alone farmers markets (or cow shares!). They don't have a South Lawn upon which to grow their own organic foodstuffs. As Martin describes, "Most shopping is done in so-called corner stores with limited (and often questionable) selections." The rest of his essay is spot-on and worth the read.
Posted by Bix at 4:50 PM

"Consider the 1% of people in this country who clamor about raw milk against a backdrop of 18% of children whose access to food at all is uncertain, and who barely have a voice."

If you are going to frame it that way, consider the amount of money spent on animal rescue in this country, which certainly dwarfs that spent on raw milk. Most people these days care more about saving dogs than saving children.

I just saw that USA Today covered this story. There are about 275 comments there. Oh, baby:

Those are really low numbers compared to my reservation, Pine Ridge, SD. They should do a singular study and then compare the numbers. Always like checking in here and finding something interesting! ;) peace

Leo, always good to hear from you, always appreciate your perspective. So, you had me curious, you're right:

"Unemployment on the reservation hovers between 80% and 85%, and 49% live below the Federal poverty level."
- Pine Ridge Indian Reservation, Wikipedia