When E. coli On Produce Cannot Be Washed Off 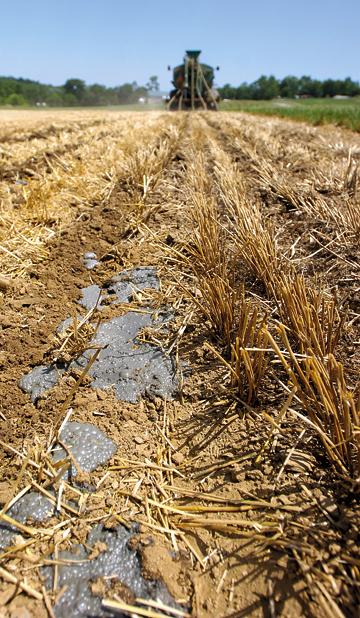 No matter how much care food processors take to prevent bacterial contamination of produce, if the water and soil in which the plant is grown is contaminated, the plant may be too ... inside.

Here are two studies that demonstrate:

Researchers added E. coli to the growing medium (soil or hydroponics) of lettuce. The bacteria adhered to the plants' roots allowing internalization through roots, stomata, cuts, or bruises.

"These data suggest that preharvest crop contamination via contaminated irrigation water can occur through plant roots."

Researchers inoculated spinach seeds with E. coli, grew them in soil, and found E. coli on the leaf surfaces and roots 42 days later:

"E. coli was recovered from the external surfaces of spinach roots and leaves as well as from surfacesterilized roots."

Researchers also grew 20-day old plants hydroponically in an E. coli-infused medium. They found E. coli associated with the roots after harvest, even after surface sterilization, "indicating that it had been internalized."

"Competitive microflora in soil may have restricted root colonization by E. coli."

So - organic or locally grown, thoroughly washed after harvest - these should not instill peace of mind if the water, soil, and fertilizers (e.g. manure) used to grow produce are themselves contaminated. And in the case of E. coli O157:H7, you only need about 10 bacterium to infect and cause illness. (See 100,000 Fit On A Pin Head; Only 10 Needed To Kill.)

________
Photo of a local farm in Maryland by Dylan Slagle of the Carroll County Times. Caption:

"Organic liquid fertilizer recovered from poultry production is applied by injection to a grainfield on the Snader farm in Marstan July 15 [2009]."

That's very interesting about hydroponic vs soil. Re manure on organic farms, no responsible farmer uses raw manure, but only fully composted manure. However, as we all know, many "organic" farms are organic in name only, adhering to the minimal letter of the law and not the spirit.
Doesn't the aging, composting process (in which considerable heat builds up) kill the bacteria in manure (which of course should only be from herbivore animals anyhow)?

Composting reduces levels of bacteria. It doesn't eliminate them. From Richardson's article:

"The major difference between Class A [Biosolids] and Class B is the amount of fecal coliforms present in the sludge. While it's lower in Class A, studies show it regrows in the compost after the treatment process is over."

The sludge still has use though it may not be for food production. Why not use it as fertilizer for crops not consumed, like for crops raised for bio-fuels or trees for renewable sources of wood. It isn't useless.

Growing trees for wood. You know, that's not a bad idea.