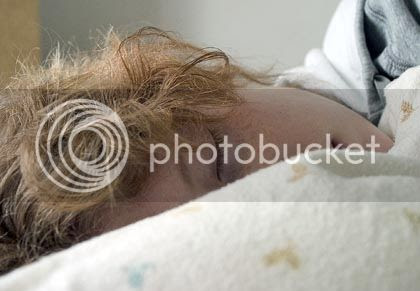 As if setting aside 60 minutes every day to exercise isn't enough of a challenge to time management skills and body weight goals, research is cementing the theory that anything less than 8 hours of fitful sleep each night can make you fat. Talk about competing messages. Picture of Emily Sleeping on Pillow thanks to Eric Rolph.

Our sleeping and eating routines are intricately woven. Take an animal's food away (whether forcibly or in the case of an eating disorder, voluntarily) and they sleep less.1, 2 Take an animal's sleep away and they eat more, lots more - and the food they choose is calorie-dense and high in carbohydrates.3, 4

This relationship between lack of sleep and food intake isn't just a byproduct of being awake more and having more opportunities to surrender to the temptation of that chocolate cake in the fridge. The relationship is hard-wired - controlled by neurons, hormones, and other mediators, and thought to have evolved to protect against starvation during times of famine. If you're starving, best to continue foraging than sleeping. And if you haven't been sleeping, it must be because you're starving - Eat!

During sleep, the body releases more leptin (a hormone that suppresses appetite). When sleep is restricted, the body releases more ghrelin (a hormone that stimulates appetite). Slice a few hours off nighttime sleep and the combination of these hormonal influences on hunger will be profound - and animals are compelled to satisfy that hunger at the expense of their girth. Progressive increases in body weight and BMI (Body Mass Index) have been measured in people who regularly sleep less that 8 hours each night.5, 6, 7

Above you see sleep durations during the last 50 years.8 Self-reported sleep durations fell by up to 2 hours in the last half century, from an average of 8.5 hours in 1960, to 6.8 hours today.9 This downward trend in sleep mirrors an upward trend in body weight. Twenty years ago, 47% of Americans were either overweight or obese; by 2002 that number rose to 65%.10

On a related note, sleep restriction has also been shown to increase insulin resistance and impair glucose tolerance, increasing the risk for type 2 diabetes. The mechanism is both direct, through alterations in levels of glucose-controlling hormones, and indirect, through increase in body weight brought about by the process described above. In fact, when a group of young healthy men's nighttime sleep was restricted to 4 hours, it took them 40% longer to clear an injection of glucose than when their sleep was not restricted.11

Getting more sleep is one change I doubt multitasking will help to incorporate, no matter how many people I see trying to catch some zzz's on the treadmill.