Flaxseed Extract Comparable To Drugs Like Flomax For Enlarged Prostate 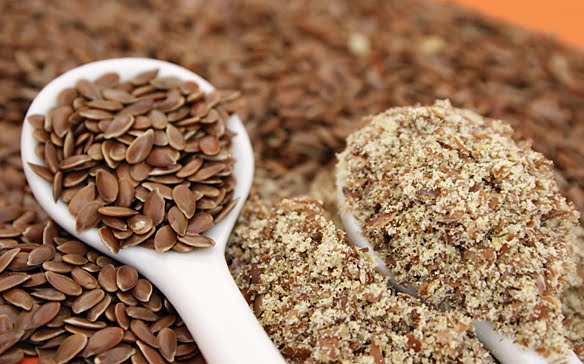 Here's a randomized, double-blind, placebo-controlled clinical trial, the gold standard of scientific research, that investigated the ability of flaxseed extract to lessen symptoms of BPH (short for Benign Prostatic Hyperplasia or enlarged prostate):

87 subjects were divided into 3 groups:

There were statistically significant improvements in the International Prostate Symptom Score (IPSS) and the Quality of Life score (QOL score) in both the 300 mg and 600 mg groups.

There were statistically significant improvements in lower urinary tract symptoms (LUTS) in both the 300 mg and 600 mg groups, e.g. more subjects taking flaxseed reported symptoms changing from "moderate/severe" to "mild."

There were also improvements in measurements of urinary flow and postvoiding urine volume.

So, flaxseed extract was comparable to Flomax (an alpha1A-adrenoceptor blocker) And Proscar or Propecia (5alpha-reductase inhibitors). I wonder how effective eating flaxseed straight up would be.

Here's a related study, a small pilot study of 25 prostate cancer patients who were waiting to have their prostates removed. They were all put on a low-fat diet (20% of calories, which isn't that low-fat, it's double the 10% seen in Ornish diets and triple the 6% of the traditional Okinawans) and told to eat about 3 tablespoons (30g) of flaxseeds a day:


"Although we were skeptical that we would observe any differences in tumor biology between the diet-treated patients and the historic control patients with a short-term dietary intervention, we found significantly lower proliferation rates and significantly higher rates of apoptotic cell death (programmed death or "suicide" of cancer cells, something our body does naturally) (Both the proliferation rate and apoptosis were significantly associated with the number of days on the diet).

Thus, these finding suggest that a flaxseed-supplemented, low-fat diet may have an effect on prostate cancer biology that may be medicated through a hormonal mechanism."

Another point of note: In these men eating a low-fat diet and supplementing with 3 tablespoons of flaxseeds, "significant decreases were observed in total serum cholesterol (201 to 174 mg/dL, P <0.05)."

Three tablespoons of flaxseeds have about 165 calories, 12 grams of fat (primarily polyunsaturated and omega-3), 6 grams of protein, and 6 grams of carbohydrate which is almost all fiber (so, 6 grams of fiber). These are little powerhouses.

I saw these studies on Dr. Greger's site. Here's a video where he discusses them and others related to BPH. And here's the video he used to kick off his BPH series. It's absulutely cringeworthy: