The Brain Carbo-Loads After A Bout Of Exercise 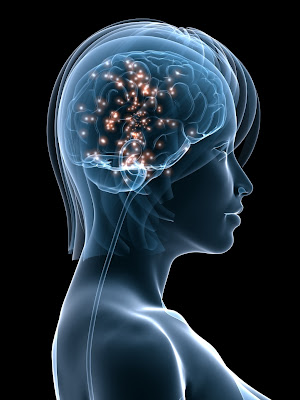 Learn something every day...

A century ago, when I was in school, they taught that glycogen was made mostly in the liver and muscles. That we carry a couple pounds of it in the liver alone (which is quickly depleted on a low-carb diet, along with many pounds of associated water). Glucogen is like animal starch, chains of glucose molecules that are assembled after we eat and packed away for quick energy later.

Now I learn that the brain makes its own glycogen:


"For many years, scientists had believed that the brain, which is a very hungry organ, subsisted only on glucose, or blood sugar, which it absorbed from the passing bloodstream. But about 10 years ago, some neuroscientists found that specialized cells in the brain, known as astrocytes, that act as support cells for neurons actually contained small stores of glycogen, or stored carbohydrates. And glycogen, as it turns out, is critical for the health of cells throughout the brain."

And that, during a bout of exercise, the brain taps that glycogen, and replenishes it quickly after eating ... to levels above and beyond the call of duty:


"After the single session on the treadmill, the animals were allowed to rest and feed, and then their brain glycogen levels were studied. The food, it appeared, had gone directly to their heads; their brain levels of glycogen not only had been restored to what they had been before the workout, but had soared past that point, increasing by as much as a 60 percent in the frontal cortex and hippocampus and slightly less in other parts of the brain. The astrocytes had “overcompensated,” resulting in a kind of brain carbo-loading."


"The “supercompensation” became the new normal, with their baseline levels of glycogen showing substantial increases compared with the sedentary animals. The increases were especially notable in, again, those portions of the brain critical to learning and memory formation — the cortex and the hippocampus."


"It is tempting to suggest that increased storage and utility of brain glycogen in the cortex and hippocampus might be involved in the development” of a better, sharper brain.

So, if I want a better, sharper brain I should exercise and eat starch?