The Jungle, Part 4: Sausage And Lard 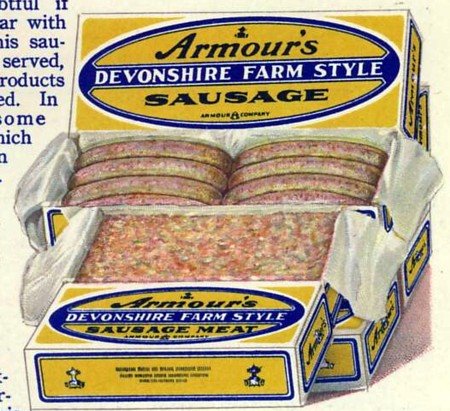 Yesterday I commented that I couldn't believe what went on in meatpacking plants 100 years ago. Here's an excerpt from Upton Sinclair's The Jungle:


"There was never the least attention paid to what was cut up for sausage; there would come all the way back from Europe old sausage that had been rejected, and that was moldy and white--it would be dosed with borax and glycerine, and dumped into the hoppers, and made over again for home consumption.

There would be meat that had tumbled out on the floor, in the dirt and sawdust, where the workers had tramped and spit uncounted billions of consumption germs.

There would be meat stored in great piles in rooms; and the water from leaky roofs would drip over it, and thousands of rats would race about on it. It was too dark in these storage places to see well, but a man could run his hand over these piles of meat and sweep off handfuls of the dried dung of rats. These rats were nuisances, and the packers would put poisoned bread out for them; they would die, and then rats, bread, and meat would go into the hoppers together. This is no fairy story and no joke; the meat would be shoveled into carts, and the man who did the shoveling would not trouble to lift out a rat even when he saw one--there were things that went into the sausage in comparison with which a poisoned rat was a tidbit. There was no place for the men to wash their hands before they ate their dinner, and so they made a practice of washing them in the water that was to be ladled into the sausage."

It's hard to believe this really went on. Wikipedia says that "Sinclair spent seven weeks gathering information while working incognito in the meatpacking plants of the Chicago stockyards." 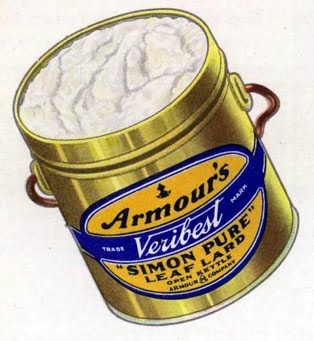 This next bit is just incomprehensible.  Sinclair is describing the different jobs men performed in the plant, and the risks that accompany each job.  For the men who worked in the tank rooms:


"... there were open vats near the level of the floor, their peculiar trouble was that they fell into the vats; and when they were fished out, there was never enough of them left to be worth exhibiting, -- sometimes they would be overlooked for days, till all but the bones of them had gone out to the world as Durham's Pure Leaf Lard!"

A lot of people ate this meat.  From the Civil War to the 1920s, more meat was processed at Chicago's Union Stockyards than in any other place in the world.

I should have read this book years ago.  I've been, and probably still am, terribly naive.  I've come to see that businesses, even today, are not above this.

________
For the photos, I'm very grateful to Kathy who writes The Food Company Cookbooks blog.

"Armour and Company published a booklet, The Business of Being a Housewife - A Manual to Promote Household Efficiency and Economy (1917, 60 pages) that contains several nice illustrations of their ham and bacon products and some of the products from their Veribest line of foods."

Also of importance is the timeline.

The Jungle seems to overturn the narrative that all our industrial food production woes started after World War II (1945). We are lead to believe that it was local pasture farming utopia before industrialization changed farming and meat production.

To the contrary, slaughterhouse and meat-packing disassembly gave industrialists like Henry Ford, the concepts for factory-line assembly.

Whuh! Well, merry Christmas, ho ho ho to you all too! Enjoy your "roast beast"!

I had known some of this in a general way, but not a lot of the specifics--utterly gross. There were similar problems in the manufacture of other foods and household items too.

I remember the North Carolina fire and how horrified I was by it. It was no different, really, than the Triangle Shirtwaist fire so many years earlier. It's my personal opinion not only that workers need union representation, to prevent such abuses of power, but also that we need government oversight and regulation of manufacturing, farming, etc., no matter how flawed that regulation can be. Because it's clear that business, left on its own, definitely will sink to the lowest possible level. Caveat emptor.

Ben's points about our vision of pre-War farming, as well as assembly/disassembly, are interesting.

Really hard-hitting series of posts Bix. I would never read this book on my own, knowing something about its content. But your synopsis is very helpful.