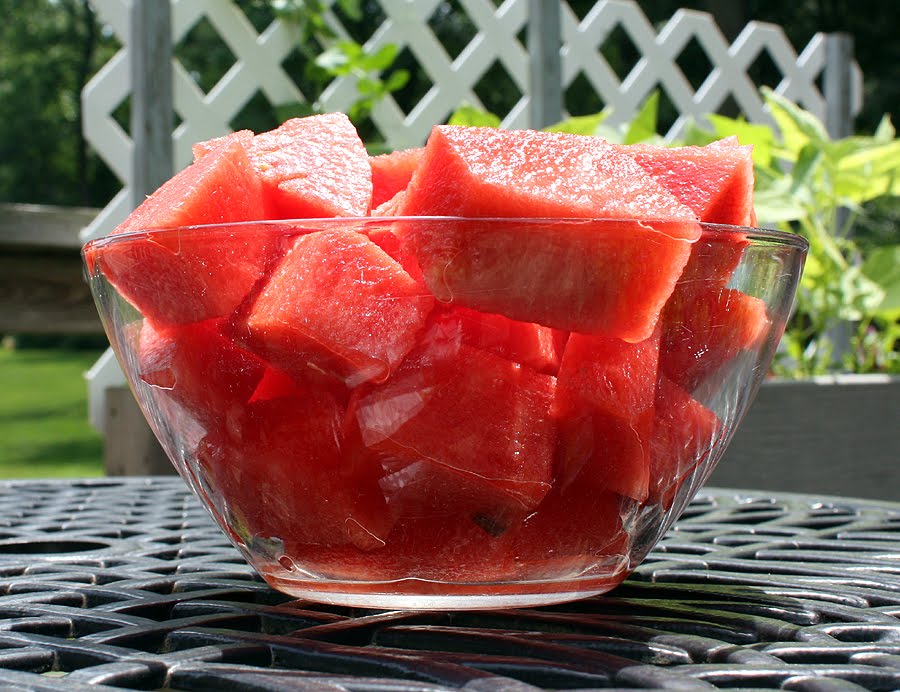 For a food that's 92% water by weight, it's amazing it has any other benefit besides sweet hydration. But...

Effects Of Watermelon Supplementation On Aortic Blood Pressure And Wave Reflection In Individuals With Prehypertension: A Pilot Study, American Journal of Hypertension, 2011

In this study, participants (4 men/5 women, mid-fifties, with prehypertension: ~134/77 mmHg) had lower blood pressure* after 6 weeks of watermelon:

"To the best of our knowledge, this is the first study demonstrating beneficial effects of L-citrulline/L-arginine from watermelon supplementation in arterial function in humans."

Watermelon is rich in a substance called citrulline, which the body converts to the amino acid arginine, which can be used to make nitric oxide. (Another name for nitric oxide is nitrogen monoxide - like carbon monoxide except nitrogen instead of carbon.)

When blood vessels are exposed to nitric oxide, the muscles that make up the vessel relax, the vessel opening widens or dilates, and blood flow increases. (The drug Viagra uses this same nitric oxide mechanism to increase blood flow trough the penis causing erection. My mother, after her stroke, wore a nitroglycerin patch, thought to raise blood levels of nitric oxide to keep vessels flowing freely. She used to ask me if her arm would explode. I reassured her but I really had no idea.)

So finds this study:

Rats were fed watermelon juice for 4 weeks. Compared to the control (fed water), and to groups fed lycopene and pectin, the melon drinkers had:Supplementing with arginine has been shown to produce many of these benefits in humans. (It's not a sure thing though because not all arginine gets converted to nitric oxide. The body has other uses for arginine, notably making urea to get rid of nitrogenous waste!) Supplementing with citrulline, however, is more likely to result in these benefits since the body breaks down up to half of oral arginine after we ingest it, then much of what's left intact goes straight to the liver, not the vessels. Not so with citrulline, which doesn't get degraded easily and bypasses the liver ending up in the blood stream. Gram-for-gram, less citrulline than arginine is needed for the same effect. 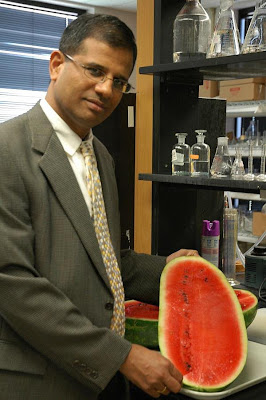 "We’ve always known that watermelon is good for you, but the list of its very important healthful benefits grows longer with each study."

In watermelons, these include lycopene, beta carotene and the rising star among its phyto-nutrients – citrulline – whose beneficial functions are now being unraveled. Among them is the ability to relax blood vessels, much like Viagra does.

"The citrulline-arginine relationship helps heart health, the immune system and may prove to be very helpful for those who suffer from obesity and type 2 diabetes. ... Arginine boosts nitric oxide, which relaxes blood vessels, the same basic effect that Viagra has, to treat erectile dysfunction and maybe even prevent it. Watermelon may not be as organ specific as Viagra, but it’s a great way to relax blood vessels without any drug side-effects.”

Almost 92 percent of watermelon is water, but the remaining 8 percent is loaded with lycopene, an anti-oxidant that protects the human heart, prostate and skin health.

“Lycopene, which is also found in red grapefruit, was historically thought to exist only in tomatoes,” he said. “But now we know that it’s found in higher concentrations in red watermelon varieties.”
- Watermelon May Have Viagra-Effect, ScienceDaily, 2008

yum, i have some left in the fridge - i'll have it tomorrow.

I don't know that water melon had this many benefits.
Thanks for sharing.

Thanks VERY much for this perfectly-timed (for me) post! I just returned from taking care of my mother after her aortic aneurysm repair surgery, and hubby insisted on stopping at a country produce stand to pick up some yellow watermelon (which tasted awesome!), but maybe doesn't have as many goodies in it as red watermelons?