" "At this point, we know that one GPS station moved (8 feet), and we have seen a map from GSI (Geospatial Information Authority) in Japan showing the pattern of shift over a large area is consistent with about that much shift of the land mass," said Kenneth Hudnut, a geophysicist with the U.S. Geological Survey.

Reports from the National Institute of Geophysics and Volcanology in Italy estimated the 8.9-magnitude quake shifted the planet on its axis by nearly 4 inches."
- Quake Moved Japan Cast 8 Feet, Shifted Earth's Axis, CNN 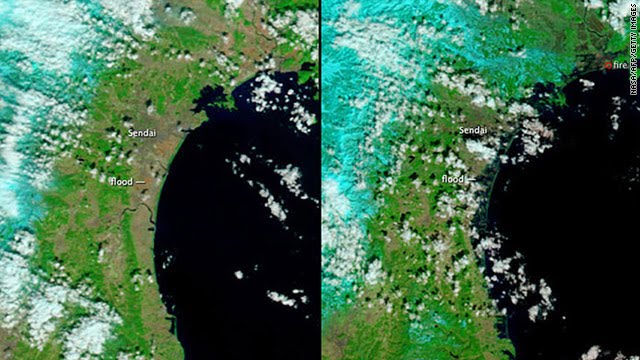 Images released by NASA show Japan's northeast coast before, left, and after flooding from the quake-induced tsunami.
So, this is more than the lost of coast from flooding? The whole island moved? It all makes you feel like a very small and fragile speck in the universe.
________
Posted by Bix at 8:37 AM