If you downplay the contributions of fat and protein in the diet, the question becomes ... Can you eat a high-carbohydrate diet if you have diabetes? Yes. In fact, it may be easier to manage blood glucose when you're consuming a diet rich in minimally processed carbohydrates ... whole grains, beans, root vegetables, squashes, leafy greens, whole fruits.

That was the finding of this study:

Participants, all of whom had type 2 diabetes, were assigned to either a low-fat vegan diet or a conventional diabetes diet (using 2003 American Diabetes Association (ADA) Guidelines), which they followed for 22 weeks.1

Here were each group's goals:

The high-carb, low-fat diet (HCLF): (~10% of energy from fat, 15% protein, and 75% carbohydrate) consisted of vegetables, fruits, grains, and legumes. Participants were asked to avoid animal products and added fats and to favor low–glycemic index foods such as beans and green vegetables. Portion sizes, energy intake, and carbohydrate intake were unrestricted.

Here's what participants ate over the course of 22 weeks (which did not quite meet their goals). Click to enlarge:* 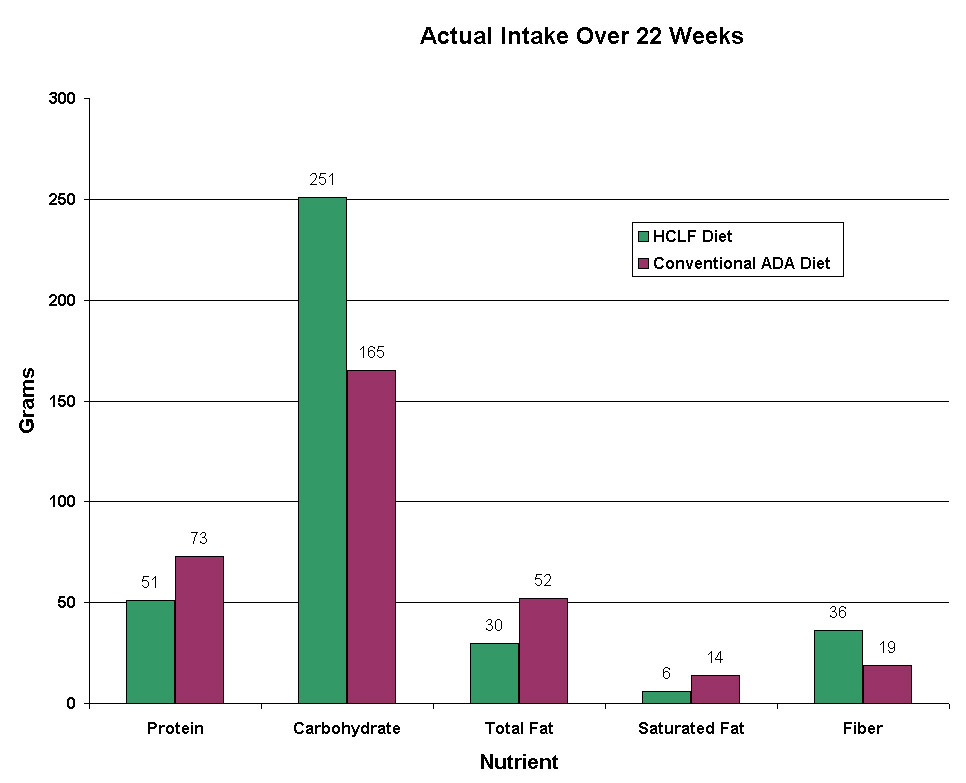 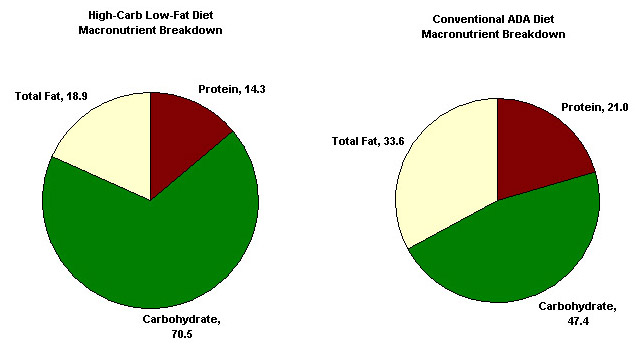 * Not shown:
High-Carb Low-Fat Diet: Caloric intake 1425 kcal/day, Cholesterol 24 mg/day. Note that they did not eat a vegan diet.
ADA Diabetes Diet: Caloric intake 1392 kcal/day, Cholesterol 189 mg/day
________
What happened when people with diabetes ate a high-carb, low-fat diet - consuming 70% of their calories as minimally-processed carbohydrates? They lowered their blood glucose. Here's how each group fared (all of the following were statistically significant):

Among participants whose diabetes medications remained unchanged: (A1C is short for hemoglobin A1c or HbA1c, a measure of blood glucose over the last 3 months.)Reduction in diabetes medications:Body weight decreased:Among those who did not change lipid-lowering medications:Reductions in urinary albumin:1Those on the high-carb, low-fat diet had lower blood sugars (and so could reduce their meds more), lower LDL cholesterol, improved kidney function and over double the weight loss. There were also significantly greater reductions in BMI, waist circumference, and total cholesterol in the HCLF group compared to the ADA group. There was no significant difference in exercise between groups, so these changes weren't because vegans were overtly spending more calories. ("Overtly" is key, since, as previously discussed, some diets lead to greater expenditure of calories from digestion and thermogenesis.)

Gary Taubes in his book, Good Calories, Bad Calories said, "Carbohydrates make us fat and ultimately cause obesity. The fewer carbohydrates we consume, the leaner we will be." This study did not support his claims.

Participants in the HCLF group were allowed unrestricted consumption. They could eat as many calories and as much carbohydrate as they wanted, as long as they didn't eat from certain food groups. Participants in the conventional diet group had to limit their caloric intake, count calories, and control portion sizes. Even with unrestricted food intake and a higher calorie consumption, the high-carb group lost more than twice as much weight. I agree with Taubes about one thing ... all calories are not alike.
________
1 People with diabetes suffer microvascular complications involving the kidneys which allow passage of protein into urine. The lower the amount of the protein albumin that leaks into the urine, the healthier the kidneys.

Absolutely fascinating Bix! Most of my diabetes clients want to eat low carb. I wonder how popular diets are going to change in the next few years?

This is a highly suspicious study because no meals were actually provided. Instead the subjects were made to provide their own food and simply meet up with a dietician from time to time for monitoring.

Additionally there is no mention the average calorie intake in the vegan group. Perhaps it ended up being mor a VLC (very low calorie) diet than a low fat one.

What amazes me is that vitamin b12 had to be supplemented throughout the study clearly indicating the shortfalls of vegetarian diets.

As for the weight loss....was it fat or muscle?

To the person who stated that "there is no mention the average calorie intake in the vegan group,"

As noted in the post, the average calorie intake in the vegan group was 1425 kcal, in the ADA group it was 1392 kcal. The vegan group consumed more.

This is total crap. A high carb diet would increase insulin response. More insulin causes more insulin resistance causing diabetes to become worse. If you have ever taken insulin you would know that it causes you to get very fat fast. If you research the bodies response to sugar you would know that it causes responses in the body that would increase blood pressure, insulin release and adrenalin. In fact all the factors for high blood pressure are caused by the bodies reaction to carb intake.

60% carbs, 30% protein, 10% fats is the dietary recommended diet for decades. This is the same ratio found in pig, cow and chicken feed used to help make them fat for the slaughter. I used to raise pigs when I was younger, its clearly listed on the labels. In fact this is the same diet that was taught to me in college for my degree almost 20 years ago.

What then is this study for, if this is already the recommended diet in America? I think it is to save face. No one wants to admit they have been wrong for over 30 years and to have led a lot of people to their deaths.

It is a common misconception that carbohydrates cause type 2 diabetes. A prevailing theory in the research community involves not carbs, but fats (lipids). The study in this post is one among many that discuss it:

"Insulin resistance is related to lipid accumulation within muscle cells (intramyocellular lipid), apparently due to a genetically based reduction in mitochondrial activity identifiable many years before diabetes manifests (20).

This lipid accumulation may be responsive to diet. High-fat diets appear to downregulate the genes required for mitochondrial oxidative phosphorylation in skeletal muscle (21).

Independent of their effect on body weight, reductions in total fat intake and in the proportion of dietary saturated to unsaturated fat increase insulin sensitivity."

Reduction in mitochondrial activity is associated with a reduction in VO2 max, another early marker for insulin resistance. I mentioned here:

There are other mechanisms under study that support this fatty acid theory, some I've talked about such as intracellular fatty acids impeding the movement of the GLUT4 transporter to the cell membrane. GLUT4 is needed for glucose to enter the cell.

As a new widower I did not know how to cook and I had no interest in learning. So I ate more raw food. In less than a month I was off my Insulin in less than a month. I had been on two shots/day for over 25 years. I now follow John McDougal's diet:no dairy, sugar, oil and no meat of any sort(beef, pork, fish,chicken etc.)My sugars, cholesterol, blood pressure, and all other numbers have been normal for over a year. At 77 years old, the only prescription drug I now take is a blood thinner. I cheat occasionally with no ill effect.

Thank you for sharing your experience, Jim - 77 and no meds to speak of is a real accomplishment.

I think the McDougall diet has a lot to recommend it. I've seen a number of people benefit ... better blood pressure, weight, blood glucose, cholesterol.

How would this diet effect low blood sugar- hypoglycemia? Some fat and protein really help my blood sugar from dropping.