Protection Of Public Health Is A First Responsibility Of Government 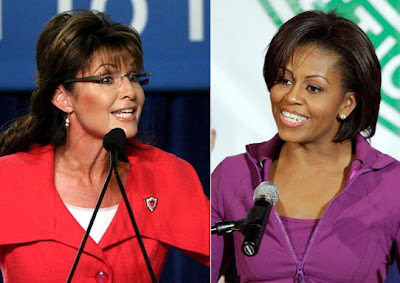 Since Sarah Palin is keen on landing the job of supreme public servant, it would do her well to bone up on public health, as it is a primary responsibility of government.

"Take her anti-obesity thing that she is on. She is on this kick, right. What she is telling us is she cannot trust parents to make decisions for their own children, for their own families in what we should eat.

And I know I'm going to be again criticized for bringing this up, but instead of a government thinking that they need to take over and make decisions for us according to some politician or politician's wife priorities, just leave us alone, get off our back, and allow us as individuals to exercise our own God-given rights to make our own decisions and then our country gets back on the right track."

Let me contrast Palin's assertion - that individual choice is the antidote to the obesity epidemic - with assertions in three recent in-depth publications.

"Although personal responsibility plays a crucial part in weight gain, human biology is being overwhelmed by the effects of today’s ‘obesogenic’ environment, with its abundance of energy dense food, motorised transport and sedentary lifestyles. As a result, the people of the UK are inexorably becoming heavier simply by living in the Britain of today. This process has been coined ‘passive obesity’. Some members of the population, including the most disadvantaged, are especially vulnerable to the conditions.
...
The evidence is very clear that policies aimed solely at individuals will be inadequate and that simply increasing the number or type of small scale interventions will not be sufficient to reverse this trend."

"At any population level, ‘business as usual’ will not control or reduce overweight and obesity. This is a public health issue. All public health challenges and opportunities require public support, public money, and public resources, from the public authorities. This means that formally the lead must come from government, and in the case of a global crisis at all levels, from global to international to national to state and province, to municipalities and communities.
...
Protection of public health is a first responsibility of governments at all levels, especially including heads of state and prime ministers. This implies renewed political will. It also implies a new understanding of public health as the first public good, needing adequate and therefore increased human, financial, and other material resources’
...
How can the change come? As with tobacco and alcohol, and indeed other big public health issues, all the evidence shows that the lead has to come from governments.
...
Properly seen, nutrition as practiced is a branch of public health. The health of populations is crucial to the social, economic and other aspects of the welfare of nations. The current pandemic of obesity is a great warning sign that something has gone very wrong with the systems of governance now being operated in the world."

"Governments can increase choice by making new healthy options available, or by making existing ones more accessible and affordable.
...
A survey of national policies in 2007-08 covering all OECD and EU countries shows that governments acknowledge that individuals are often exposed to large amounts of potentially confusing information on health and lifestyles from a variety of sources, and assert that it is primarily their responsibility to act as a balanced and authoritative source of information, thus providing clear guidance to individuals who struggle to cope with increasingly powerful environmental influences.
...
Individual interventions have a relatively limited impact; therefore, comprehensive strategies involving multiple interventions to address a range of determinants are required to reach a “critical mass” – one that can have a meaningful impact on the obesity epidemic by generating fundamental changes in social norms."

- Obesity and the Economics of Prevention: Fit not Fat, 265-page OECD (Organization For Economic Co-Operation And Development) document, September 2010

This last reference noted that a "multi-stakeholder" approach would have the most success. That would involve individuals, government, industry, and citizen groups acting together. Not easy, but not impossible.

If Palin read just these three documents, she would be far-and-away more educated on the topic than her comments reveal she is. You can't tell someone dying of thirst in a desert to just drink more.
________
1 Palin Slams Michelle Obama Again, This Time For Anti-Obesity Campaign, Huffington Post, November 24, 2010
Posted by Bix at 10:21 AM

CNN correspondent Roland Martin has a good column on Palin's statement called "Palin's reckless views on obesity"
http://www.cnn.com/2010/OPINION/11/24/martin.michelle.obama.palin/index.html?hpt=T2
Obesity is also affecting U.S. military readiness and national security. As a supposedly strong military supporter you would think Sarah Palin would know this but she doesn't.
Also, solving the obesity crisis is probably the best was to control health care costs.

"Solving the obesity crisis is probably the best was to control health care costs."

Man, that should be engraved on a plaque and hung in the walls of Congress.

Palin has said some whacky things, but about this I will cut her some slack (barring her manner of delivery which I thought was unnecessarily cavalier).

Years ago I held the same belief - that my diet was my business, what I ate was entirely up to me. Now I realize that was an immature belief, unexamined, self-involved. We aren't alone in the world.

For goodness sake, the government is already "making decisions for us" as she said, through subsidies and tariffs and trade rules and currency valuations and many more things I barely understand. Michelle Obama's "Let's Move" campaign is a tiny, tiny, initiative. Still, it raises awareness. As long as governments exist they will affect their peoples' diets. The better thing to do is accept government's pull and try to steer it in the direction you want ... instead of negating it.

It does surprise me that someone such as Palin who has spent so many years studying and working with public policy doesn't see this.

Palin is an opportunist who is making the most of the visibility John McCain gave her as his 2008 VP pick. She is about milking the tea party, anti-government, anti-Obama sentiment. Good government policy is not what Palin is about. Winning the GOP 2012 Presidential nomination and selling books is. If disparaging Michelle Obama's anti-obesity initiative helps Palin get the nomination and sell more books, then that what she will do. Power & money. Pretty cynical view, isn't it.

I'm with RB. Palin's a scatterbrain opportunist. Didn't she think Africa was a country?

Palin has a serious medical problem that you shouldn't be making fun of. She serious in-grown hairs, (SIGH), that have reached her brain and destroyed cognitive brain functions. She now functions on pure greed. She is hair-brained.

Sad to say, this is one instance I'm not American. Sorry, guys. I hope America is smart enough to keep Obama in.

isn't obesity also linked to the farming practises that is used to cultivate food.?

Todays potatoes have more sugar than that was cultivated decades ago.
Eating chicken that is grown in 5 days is more harmful than eating chicken that takes natures course.
tomato ketchup, mustard, mayonnaise, cereals and many others have by products of Corn in some form or the other. Finger licking sauces with wrong composition is what leads to obesity.
Yogurt is good for health but without the probiotic bacteria ( if that is the correct name ) is like eating chalk not curd which is better than eating cheese for protein.

America is a great country, but their food industry is the ticking ENRON.