"Meat And Potatoes" Dietary Pattern And Risk For Colon Cancer 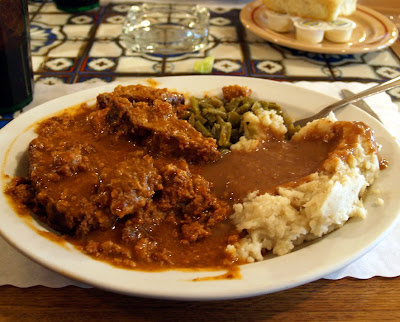 My previous post on Seventh-day Adventists revealed a link between a "meat-and-potatoes" diet and risk for colon cancer.1

How that may work: The combination of dietary fat and high-glycemic-index carbs throws a one-two punch. Fat ratchets up insulin resistance making it more difficult to clear blood glucose resulting from easily digested starch. The pancreas releases more insulin to compensate, leaving some with undesirably high levels of insulin and other growth (including cancer growth) promoters.


"We observed that both for men and (especially) women, a dietary pattern characterized by frequent meat and potato consumption was associated with an increased risk of colorectal cancer."

A decade later and this association hasn't gone away. (Although the gender risk has flipped. Sex hormones meddle in strange and wonderful ways. Well, at least when they're endogenous. Synthetic sex hormones like bisphenol-A that leach from bottles and plastic linings of canned foods and which disrupt endocrine functioning are not wonderful. I wonder if this is contributing to gender risk differences. How can it not?)

This is one of a new type of studies that analyzes dietary patterns instead of single nutrients. Since we don't eat foods in isolation, drawing meaningful associations from consumption of a single nutrient can be difficult. (Pattern analysis isn't exactly straight-forward either, from what I read, but it's developing.)

Their analysis identified three major patterns in this group of over 492,000 AARP members (a very unique group):
Generally, the first group (meat and potatoes) experienced an increased risk for colon cancer, the other 2 groups experienced either a lower risk or there was no association (for women, the fruit and vegetable pattern neither increased nor decreased risk).

I didn't see a rice and beans pattern. Class, culture, and how they impact dietary choices must affect this type of analysis. It would have been nice to see what a rice&beans pattern did to colon cancer risk.

Two more studies. These are meta-analyses, i.e. studies of studies.2


"High intake of red meat, and particularly of processed meat, was associated with a moderate but significant increase in colorectal cancer risk."


"A daily increase of 100 g of all meat or red meat is associated with a significant 12–17% increased risk of colorectal cancer."

"A significant 49% increased risk was found for a daily increase of 25 g of processed meat."

The increased risks were nowhere near what the Seventh-day study found, but...

It doesn't mean dietary risks don't exist, or that we can never discern them. It's as shaun said, "It's like a spider web, when one variable changes, everything else shifts to varying degrees. It's complicated."

________
1 "Meat-and-potatoes" is a name I'm using for a pattern of eating (high fat along with high-glycemic-index carbs) that is common in developed Western countries.
2 Meta-analyses are good in that they combine (and so have a large data base of participants) and reassess similar research questions (Does X impact Y?) They're risky in that they only analyze published studies, which creates bias (based on publication bias). Bias can also be introduced in the selection of studies, and in subjective differential weighting of variables. It's always a good idea to check the affiliation of the authors.
Posted by Bix at 7:32 AM

A) I'm screwed. I'm European and I love my meat and potatoes. *sigh*

B) I'm currently finding out white, dense starches are part of the culprit of my digestive problems. I wouldn't at all doubt either right now, that they're also a factor with my sugar. I'm currently playing with these facts to get more evidence.

C) I completely agree as well that this sort of study is beneficial. But if I eat meat and potatoes (okay, honestly, I don't do it as often as it may sound, but it is one of my favourite meals), do you think if I increase more fruits and vegetables, that it would offset the effects of the other meals?

I wonder if the meat and potatoes correlation exist outside of fast food.

AARP could have probably included soda/sugar into the mix.

Plus an ashtray - the good old days.

I would love a plate of mashed potatoes, covered with homemade gravy, for lunch...

Perovskia,
"Eating more" is not a solution. All foods are toxic. It is more about eating the least amount toxicity while gaining the most critical nutrients.

It is hard to imagine that there are magical vegetables out there than can simply remove the growth hormones / antibiotics and mercury from the beef and fish we eat.

It is also hard to imagine that vegetables can also replace the nutritional value that meats can provide us, especially if they are fed in the ocean or free range.

Bix would love to get your thoughts on this:

not so much about the cancer fighting benefits but what li said about starving fat cells in mice.

I don't think these studies are enough, by themselves, to guide how we eat, but they're suggestive.

Increasing fruits and vegetables provides benefits. But if they're added on top of a diet that already supplies energy needs, it may do more harm than good.

I think if the diet you're eating is making you healthy, you're doing something right.

I've heard about anti-angiogenesis foods, like functional foods. It's interesting. If it results in us extracting and purifying some anti-angiogenesis factor(s), and selling them as drugs, I don't know. Maybe as cancer therapy. But, if the application of this is eating rice, beans, parsley, garlic, grapes, berries, tea, I don't see the harm. These foods provide benefit in other ways too.

About the fatty mice. I wonder what caused the weight loss. Was it only fat loss? What other tissue may be affected by inhibiting angiogenesis to this degree? That is, might you lose fat but cause or worsen another condition? Slow healing? I've read studies that say that the ability to lay down fat is actually protective (to a point).

Still, it would be another reason for eating a whole foods, plant-based diet.

I never meant to imply eating well would take away the effects of eating poorly. Nor did I mean that eating more of something good would take away of some of the bad. I'm thinking I incorrectly stated my comments/thoughts.

I don't agree with the statement "all foods are toxic".

I knew that potato and meat is not good combination for digestion. If carbs and proteins are mixed, the food stays in body for more than 24 hours and that is definitely not good thing for metabolism.

I was taught in my studies *to* mix carbs and proteins. Or at least, eat a protein with a carb meal, so your blood sugar doesn't drop.

I'll have to look back in my books to get the full rationale, sorry.

A healthy person, someone who is not overweight or underweight and who does not have an endocrine disorder such as diabetes or insulin resistance, will be able to maintain blood glucose in a normal range regardless of whether they mix macronutrients (carbs, proteins, fats) or not.

I should add ... eating a lot of refined carbs which are rapidly processed, such as a soft pretzel, is probably not a good idea for anyone.