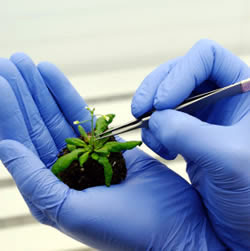 There's a new interview with Jeffrey Smith, author of Seeds of Deception (which questions the safety of genetically engineered foods) on a site called the Azure Standard:

An Interview with Jeffrey M. Smith, Oct/Nov 2009
by Susan Booth

Susan Booth: What is the difference between genetic modification versus just regular hybridization or selective breeding?

Jeffrey M. Smith: Genetic engineering is not natural. It carries unique risks and is fraught with unpredicted side effects.

In normal hybridization or selective breeding you take plants from the same species or related species and they essentially have sex and their offspring share genes from both parents. With genetic engineering, you take a single gene or combination of genes from other species, and you manipulate the gene in the laboratory. You add, typically, an "on switch" called a Promoter from a virus and other materials and then you force it into the DNA of the plant. Then you clone the cell into a plant… The process of insertion, whether through "gene gun" technology or bacterial infection, plus cloning, causes massive collateral damage in the DNA. It leads to hundreds or thousands of mutations up and down the DNA, and hundreds or thousands of genes that can change their levels of expression in the natural plant. These changes can lead to unpredicted side effects, such as new or higher levels of toxins, carcinogens, allergens, or anti-nutrients. And this is not theoretical. They have actually found these types of things in the genetically engineered crops already on the market.

Booth: If it’s that dangerous, and has that many problems, why do they do it?

Smith: The White House [George H. W. Bush administration] had been convinced that genetically engineered foods would increase U.S. exports and our domination in world food trade. They ordered the FDA and the other regulatory agencies to fast-track GM foods.

Booth: What are some of the bad things that could happen to children who are consuming a lot of genetically modified foods? I know you talk about allergies, and the fact that soy allergies skyrocketed in the U.K. when genetically engineered soy was introduced.

Smith: Well, with allergies, I just found out… Emergency room visits due to allergies doubled in the United States in the five years following the introduction of genetically modified foods.

One top biologist in the world recently told me that he sees the increase in so many health problems in the US in the last 10 or 15 years, and he believes that the introduction of genetically engineered foods into the American diet is largely responsible for those changes. So, these could be any of the "new" diseases, or the increases in diseases, from autism and allergies to obesity and diabetes, to digestive system cancers to virtually anything.

Children’s digestive systems, their gut bacteria, their whole defense system is not particularly well-developed, and we find in the only human feeding study ever published, that genes can transfer into the DNA of bacteria living inside our intestines. There’s more opportunity for the DNA to transfer into the gut bacteria [in children because their] DNA is broken down at a slower rate or not at all.

Also, the gut bacteria in the infant, I’m told by doctors, is first populated by the bacteria inside the womb of the mother. So if there are already gut bacteria problems and imbalances due to GMOs in the mother, then that’s also a problem.

If the Bt toxin, which is part of genetically modified corn, causes disturbance in the walls of the intestines, as it may in fact be doing, it might cause some kind of leaky gut which could cause toxicity in the blood. And since the blood-brain barrier in children is not well developed, it could also result in toxicity of the brain, which could contribute to a whole host of some of the psychological disorders and learning disabilities.

I’m mentioning just a small list compared to what could be happening due to GMOs. They’ve found, for example, that both soy and corn have higher levels of lignan, which was not supposed to happen. The metabolic pathway that produces lignan also produces Rotenone, a plant pesticide which is linked to Parkinson’s Disease.


________
A follow-up to these uncertainties is often, "What is recent research showing?" Unfortunately, there is little research being conducted, as this article from the New York Times explains:

Biotechnology companies are keeping university scientists from fully researching the effectiveness and environmental impact of the industry’s genetically modified crops, according to an unusual complaint issued by a group of those scientists.

The problem, the scientists say, is that farmers and other buyers of genetically engineered seeds have to sign an agreement meant to ensure that growers honor company patent rights and environmental regulations. But the agreements also prohibit growing the crops for research purposes.

Perhaps medical advances and treatment are able to overcome the damage of genetic modification.

Or the dangers of genetic modification are overblown.

I guess I'll have to stick with traditional foods ... like Coca-Cola Classic and Hostess Twinkies.

Not sure how you are relating morbidity with mortality, Steve.

"Also, the gut bacteria in the infant, I’m told by doctors, is first populated by the bacteria inside the womb of the mother. So if there are already gut bacteria problems and imbalances due to GMOs in the mother, then that’s also a problem."

...This answers our question about genetics. My grandmother had 'spastic colon', which apparently my mother is now told she has it. I've had IBS the past 10 years. So this sort of digestive disorder is passed from generation to generation. If it's a factor of GMO's/food, then that has to be argued, but I wouldn't doubt it now at this point. *sigh* All the more reason for me to try to reach a whole-foods diet.

Well, Perovskia, I don't know how much influence GMO's would have beyond about a decade. Genetically engineered soy, corn, etc., took off after 1996. Any changes in populations would be occurring after this time.

Hmm.. yes, I didn't think GMO's went back that far; it felt a little funny making that statement. So maybe I should go back to the theory of the industrialization of food.

Just checked out foodrules, thanks Bix (and shaun) for posting since I don't do Twitter.

The more biotech companies suppress independent research, the less credible any of their claims are - even if/when they're positive.

"If organic corn seed crops were tested, they would find GMOs all over the place," Morton said. "We know this. We know this for sure. It's a dirty secret."

I have been eating organics for a little over a year, thanks for this article. I stay away from GMO when I can

This is evil on so many levels I don't know where to begin: the anti-democratic approach of concealing GM foods (I bet I've already ate some, even though I don't eat meat), the constant belittling and dismissal of concerned citizens as alarmists, the Hanan and Hurin ignoring this during their campaigns, the disturbing fact that John Sanford (not the cartoonist) inventor of the gene gun is a young earth creationist who believes the genome is deteriorating anyway. Not to mention that the very government that wants to ram this GM food down our throats is the very ones trying to hinder the teaching of science in the classroom.

Either the powers that be believe that humanity is a problem that can be fixed with the latest hot gizmo, or they don’t care whether I live or die, as long as I can still vote in the next election, and breed lots of children who can vote either Republican or Democratic.

We need labels. We need to give control back to the people.