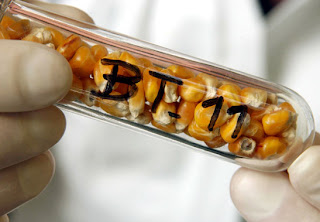 According to the Organic Consumers Association, the report above, "is part of a well-funded campaign coordinated by Monsanto and their governmental, corporate, and non-profit partners to legitimize a dangerous and untested technology."

"Organic-Biotech." If ever there was an oxymoron.
________
The photo is from one of Barry Estabrook's (of Gourmet Magazine) columns, "GM Birth Control?" He describes an experiment where mice were fed Monsanto's genetically engineered corn (pictured). The mice "had fewer litters, fewer offspring, and more instances of complete infertility than those receiving a conventional diet."
Posted by Bix at 4:31 PM

Pisses me off, Virginia. These things haven't been adequately tested, and the Ag Industry is intimidating research bodies ... so more rigorous testing isn't in the offing (unless done on the sly, in which case results aren't widely recognized).

“This is going to happen sooner or later,” he said.

*sigh* Well I'm glad I wasn't the only one befuddled about this.

I agree, it'll happen sooner or later. I just HOPE there's legislation that it has to be clearly marked on the product *where* it came from.

Not cool. Anything to make a buck :(

poison on the plate.

It's odd that this is coming out of Italy, because the Catholic Church considers genetic manipulation, and support of same, a mortal sin:

"Pollution and genetic engineering, as well as drug dealing, abortion, pedophilia, social injustice and extreme wealth were now on record as mortal sins, those the Church deems most offensive to God and those that could land you a spot in hell without repentance."
- Monsignor Gianfranco Girotti, second in command at the Apostolic Penitentiary, the Vatican body responsible for confessions and absolutions

Anrosh.. How is that different from now? :)

Bix.. That *is* interesting.

A serious question: Isn't grafting the large-fruit-bearing part of one tree species onto the hardy root stock of another a kind of genetic engineering? Aren't all of our fruits and vegetables, organic or not, the result of some sort of human manipulation? How is "genetic engineering" legally differentiated from grafting and other techniques we've used for centuries?

Legally different? Maybe someone can weigh in.

I asked similar questions a while back and found a distinction in Jeffrey Smith's writings:

Smith writes in depth in his books "Seeds of Deception" and "Genetic Roulette." From his site:

I'd say it's much different. The quote helps, too ("..that bear no resemblance to natural breeding"). Even if we, say, mix breeds of (i.e) tomatoes (so we no longer have heirloom), I'd consider that much different (better, safer) than manipulation/creation in a lab.

...And am I the only one disturbed the picture of the corn is referenced for birth control???