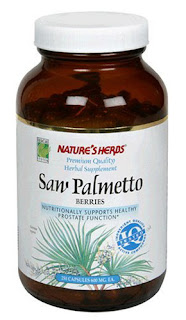 Just a few more things about saw palmetto before I move on. Tuck it away. (My previous post: Saw palmetto was found to be as effective as the prescription drug Flomax for BPH.)

The government's National Institutes of Health (NIH), in their MedlinePlus feature, gives saw palmetto a grade of A* for improving symptoms of BPH:

"Numerous human trials report that saw palmetto improves symptoms of benign prostatic hypertrophy (BPH) such as nighttime urination, urinary flow, and overall quality of life, although it may not greatly reduce the size of the prostate. ... Overall the weight of available scientific evidence favors the effectiveness of saw palmetto over placebo."
- NIH MedlinePlus: Saw palmetto (Serenoa repens)

The above is for treatment of BPH. Newer research is investigating the use of saw palmetto in prostate cancer:

"The results show for the first time the potential of [Saw Palmetto Berry Extracts] as potential anti-tumor agents."

In this study, saw palmetto extracts increased p53 protein expression. P53 protein is the famous tumor suppressor and natural anti-cancer agent that we make, or transcribe, from our DNA. P53 can repair damaged DNA sections or just kill off cells whose DNA damage is too great to fix. If it's true that 35% of men over the age of 50 have some prostate cancer cells, p53 is a good thing to have around.

The above study was conducted in Germany. There's much promise for the use of saw palmetto in prostate disorders, but I suspect most of the research will be conducted oversees.

Note: Capsules that contain the whole dried berry are less potent than those containing the fat-based extracts. Most studies I've seen use the extract, although the whole berry is thought to contain other beneficial compounds.
________
Posted by Bix at 8:18 AM