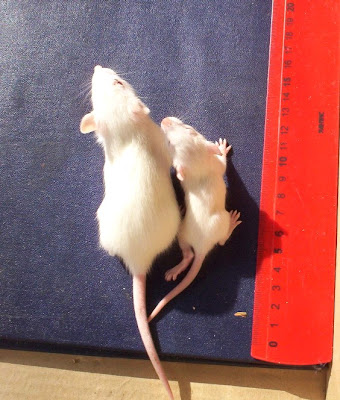 To the right is a photo from one of Dr. Irina Ermakova's studies investigating the safety of genetically modified (GM) soy.1 The smaller rat on the right was fed GM soy. The rat on the left was not. The rats are the same age.
From that same presentation in 2005, she reported:

Over half (55.6%) of the rats fed GM soy were dead in 3 weeks, compared to 9% fed regular soy. That's striking. And many that survived were, as depicted, malformed.

"The morphology and biochemical structures of rats are very similar to those of humans, and this makes the results we obtained very disturbing," said Irina Ermakova.

The presentation of this study (I can't get to the actual study) leaves many questions. I guess that follow-up studies were conducted. If this was a study investigating the safety of a new drug, would it reach clinical trial phases with preliminary data like this? Would it have been marketed? GM soy has been marketed, so I trust more studies are out there. They sure aren't accessible.

I did just post about a very recent study from Austria that supports Dr. Ermakova's finding: