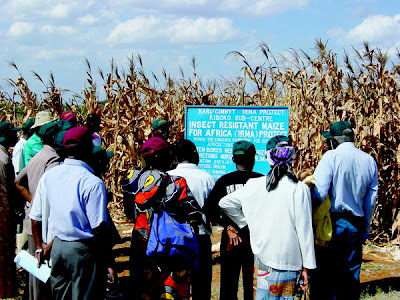 The news was reported ahead-of-publication on November 11, at a scientific seminar in Vienna, Austria.

The news isn't good news for Monsanto, who sells tons of the GM corn seed. It's not good news for laboratory mice, whose litters and offspring became smaller (in number and size, respectively) than mice fed non-GM corn. And it's potentially not good news for most Americans who regularly eat GM corn and its derivatives, via livestock fattened on it, tortillas and grits, or the corn syrups that sweeten everything from soda pop and breakfast cereal, to ketchup, relish, mayonnaise, pickles, and the bun that houses the whole corn-infused lot.

It's easy to eat GM corn (and GM soy) in America, since:1
Some argue that most corn in this country has been affected by genetic engineering since GM strains have cross-pollinated with wild, non-GM strains.

Until now, negative effects from ingestion of GM crops haven't made news:


"So far no negative effects of GM corn varieties have been reported in peer-reviewed publications."

Approval has been based primarily on short-term studies:


"Toxicological risks of GM plants are currently assessed by 90 day feeding studies with rodents. A 90 day study is considered as sufficient to detect adverse effects. However, chronic effects might only become evident in longer lasting multi-generation studies."

So, the University of Veterinary Medicine in Vienna conducted one of the first long-term studies.

They fed mice either:
All corn, both GM and non-GM, were of the same genetic lines, "grown under identical conditions in Canada." The mice were fed through 4 generations, which took about 20 weeks.


"The number of pups weaned, the average litter size and weight at weaning tended to be lower in the GM group as compared to the [non-GM] group."

"Pup losses were higher in the GM group."

"Relative spleen weights were significantly higher in the GM males of the F2 generation."

"The electron histological investigation of the cell nuclei revealed differences as to fibrillar centres (FC), dense fibrillar components (DFC) and the pore density in hepatocytes [liver cells]. This could point to an effect of the GM crop on metabolic parameters."


"The lower nuclear pore density and the lower quantity of the nucleolar components FC and DFC in both females and males, found in hepatocytes of GM mice, indicate a lower liver metabolic rate in animals fed the GM feed".

"Analyses of metabolic pathways indicated that the groups differed regarding some important pathways, including interleukin signalling pathway, cholesterol biosynthesis and protein metabolism."

Fallout
There isn't enough evidence here to perform a recall of, what, just about all the corn in the US? Even if there was, the sheer quantity would make it prohibitive. I don't think groups like the Center for Food Safety and Greenpeace do themselves a service by recommending such an extreme action.

However, there should at least be a move made to preserve a sizable non-GM corn crop in the US in the event these or other negative findings continue to bear scrutiny.