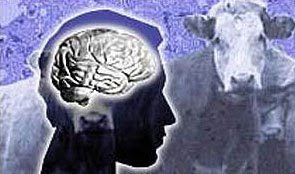 This line of thought is unsettling. If there's any truth to it, it certainly supports a cease-and-desist order regarding the feeding of animal scraps to livestock that would not normally eat those scraps, especially if those scraps come from diseased or downer animals.

Currently we recycle (render) those scraps and feed them back to livestock and pets as a cheap source of protein. (Let's stop using dried cattle blood in calves weaning formulas.)

It also supports an effective testing schedule that would keep the infectious animal agent out of the food supply.

The article has an alarmist quality to it, but it makes some credible points:

Could Mad Cow Disease Already be Killing Thousands of Americans Every Year?

The new thinking is that since some types of fatal dementia, notably Alzheimer's Disease (AD), have the same symptoms as the form of mad cow disease that occurs in humans (called variant Creutzfeldt-Jakob disease: vCJD), the prevalence of the latter may be much higher than initially thought.

Unfortunately, you can only conclusively tell the two apart via a post-mortem brain biopsy.

Yet, the CDC reports that only one human case of vCJD has occurred in the US from 1995 to 2004. (The incidence of non-variant CJD, also known as spontaneous CJD, is reported as 1 in 1 million worldwide.) ("spontaneous"?)

On the other hand, the incidence of Alzheimer's Disease has been increasing exponentially. There are currently more than 5 million people in the US diagnosed with AD.

Both mad cow disease and vCJD in humans are caused by a prion, an infectious bit of non-living protein that cannot be deactivated via heat, ultraviolet light, ionizing radiation, normal sterilization processes, or use of disinfectants that normally inactivate viruses and bacteria. (I'm not making that up.) Prions "reproduce" in the host by bumping up against another protein, causing it to adopt a shape similar to its own. 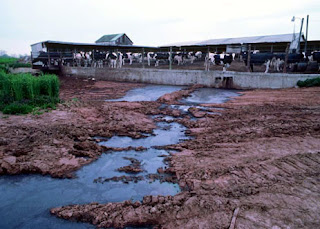 Prions "can survive wastewater decontamination and wind up in fertilizer, potentially contaminating fruit and vegetables." 1, 2 Wastewater becomes contaminated via slaughterhouse and other meat processing facility drains and runoff.

The human form of mad cow disease, vCJD, is transmissible between humans via blood. It has an incubation period of 10 to 20 years. It is incurable, untreatable, and fatal.

I don't see why, given this scenario, the USDA doesn't require more cattle be tested for mad cow disease. (The USDA currently tests about 1% of slaughtered cattle.)

Not only is the USDA not requiring much testing, it, in fact, after pressure from the National Cattlemen's Beef Association (NCBA), sued a small meatpacker, Creekstone Farms, to prevent them from voluntarily testing their cattle for mad cow disease. The president of the NCBA told the Washington Post, "If testing is allowed at Creekstone, we think it would become the international standard and the domestic standard, too."

So far, the USDA is winning, if that's what you want to call it. They've appealed a lower court's ruling in Creekstone's favor, and have refused to sell Creekstone it's requested mad-cow test kits.

Bill Marler, when you become Food Safety Administration Secretary, I hope you support increased testing for mad cow disease and other spongiform encephalopathies.