Raspberries Ward Off Cancers Of The Gastrointestinal Tract 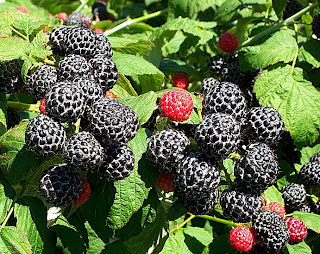 Score another point for a plant-based diet!

The American Association of Cancer Research (along with its co-sponsors and supporters, the American Cancer Society, the National Cancer Institute, the Centers for Disease Control and Prevention, Susan G. Komen for the Cure, and the Cancer Research Prevention Foundation) held its very popular Frontiers In Cancer Prevention Research meeting last December.

It's described as "the only comprehensive conference on cancer prevention in the world."

I was browsing through its abstracts (hundreds) and came across a number that discussed the benefits of raspberries ... raspberries!

Most of the abstracts referenced studies conducted previously that documented raspberries' benefits:

I've listed a few below and included a brief (very brief!) summary. You can access the meeting's abstracts by clicking the link above. Use the alphanumeric immediately before the title as a locator.
________
1. B34 Dietary Administration Of Black Raspberries Modulates Markers Of Oxidative Stress In Patients With Barrett’s Esophagus

Barrett’s Esophagus (BE) is a precancerous condition of the esophagus. It's usually related to gastroesophageal reflux disease (GERD).

After 26 weeks of daily consumption, 20 BE patients experienced significant reductions in markers of oxidative stress, inhibiting the progression of their BE.

2. CN05-03 A Food-Based Approach To The Prevention Of Gastrointestinal Tract Cancers

This was a review of these authors' recent raspberry-related research.

When rats were exposed to an esophageal carcinogen, berry-eating rats had 40-60% fewer esophageal tumors than control rats. Berries also slowed the growth rate of premalignant esophageal cells and inflammation.

When rats were exposed to a colon carcinogen, a black raspberry diet inhibited colon adenocarcinomas by up to 80%.

3. A110 Bioactive Actions Of Raspberries

Human cervical cancer cells were cultivated in nutrient mediums which either contained sera of healthy human volunteers before consumption of raspberries, or 2 hours after consumption. The growth of cancer cells cultivated on the raspberry-sera-spiked medium was inhibited.

This was a genetic study.

When rats were exposed to an esophageal carcinogen, thousands of genes in esophageal cells changed the way they expressed - initiating cancer.

But when rats ate a diet containing black raspberries before being exposed to the carcinogen, hundreds of those genes expressed normally. That is, they did not contribute to cancer formation even in the presence of the carcinogen.

5. B7 Chemoprevention Of Oral Cancer In Hamster Cheek Pouch By Topical Application Of Lyophilized Black Raspberries

In this study, a freeze-dried black raspberry concentrate was applied topically to established premalignant lesions in the hamster cheek pouch. (The hamster cheek pouch has been shown to mimic the major characteristics of human oral cancer. Who knew?) The raspberry balm was applied 3 times/week for 6 weeks and halted. After 12 weeks, tumor formation was inhibited up to 42%.

Rats were exposed to an esophageal carcinogen and assigned one of 4 diets:

Moral: Continuous daily consumption of raspberries provides the most benefit.
________
Most of these studies used a lyophilized (freeze-dried) black raspberry powder1, measured to concentrate ingredients about 10-fold. It's not known exactly which ingredients in the raspberries were responsibly for the anticancer effects, although the following were hypothesized to play a role:

I don't think black raspberries have a corner on these antioxidants. They do seem to have a corner on research funding. I did see one study that found benefit with strawberry concentrate, for oral cancer.

An aside: None of the hundreds of abstracts found any cancer-fighting effect for meat consumption. (One of our commenters mentioned that Dr. Eades, author of "Protein Power" advocates a high-meat diet for cancer risk reduction.) The ones I did see found that meat consumption increased cancer risk. I have yet to come across any body of peer-reviewed cancer research which supports the hypothesis that a high-meat diet reduces cancer risk.
________
1 Black raspberries are different from blackberries. They're less shiny and hollow inside. I've had my share of blackberries, but I've never had a black raspberry!

Post Script: From what I can tell, these studies were looking to berry concentrates as a naturally-derived form of chemotherapy. However, I don't see why anyone can't benefit from this research by including berries in their diets regularly.

I'm not one for extracts, concentrates, and pharmaceutical-sized doses of one or a few compounds - if you're healthy. Unfortunately, I foresee even more berry and other food concentrates, as supplements, on store shelves - as a result of this type of research.

So, (including Melinda's question here too) ... black raspberries, blackberries, red raspberries, strawberries, blueberries, they're all good. I've seen studies describing chemoprotective qualities of all these foods. It just so happens this particular clump of research focused on black raspberries. They do contain some of the highest levels of anthocyanins among berries. Anthocyanins are pigments that give a blue or violet color to plant foods. They've been shown, by themselves, to be chemoprotective and chemotherapeutic. But again, anthocyanins are only one group of compounds. And since these researchers used a whole food concentrate, they can't really pin down the most active compounds. There has also been hypothesized a synergistic effect of compounds - that the combined effect is greater than the sum of individual effects.

I could probably have said, instead of all these words, "Eat berries."
Posted by Bix at 4:49 PM