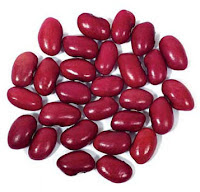 Prior to the 1980s it was thought that most starch we ate was digested and absorbed, and that those processes occurred in the small intestine. Subsequent experiments showed that portions of some starches were resistant to hydrolysis (breakdown) by our digestive enzymes. The term resistant starch (RS) was coined to describe these starches.

Up to 75% of the starch in red kidney beans may be resistant to digestion.

RS is merely starch that resists digestion - digestion, that is, by human enzymes. Dietary fiber resists digestion too, but RS is not a fiber in the traditional soluble and insoluble sense; you likely won't see it listed as dietary fiber on the Nutrition Facts label. You will see it lumped into the Total Carbohydrate amount - although that may change.

How Much RS Is In Food?


RS = TS - (RDS + SDS)
In an earlier post (Bacteria and Blood Sugar) I listed some foods known to contain RS: legumes, raw potato, green banana, cooled cooked potatoes/grains/pasta, and some types of corn and rice that contain higher amounts of amylose. (See the bottom of this post for a picture and description of amylose starch.)

But not all RS is resistant to the same degree.

Below is the current classification used for RS. There are 4 groups, varying among other qualities by degree of digestibility:

RS1 - Starch that is resistant to digestion because it exists in a physically dense, or physically protected form. Examples are whole- or partly-milled grains, seeds, and legumes. Milling, grinding (including chewing), and homogenization free this starch for digestion.

RS2 - Starch that is resistant to digestion because it exists in a physically dense and relatively dehydrated form. This lack of water is internal to the structure of the starch granule. It's not evident by looking at it. Examples are raw potatoes and unripe banana. Boiling and homogenization free this starch for digestion.

RS3 - The most resistant kind. Starch, mostly amylose, that becomes resistant to digestion when heated then cooled. Also known as retrograded starch. Examples are cooled cooked potatoes and beans. Amounts in pasta vary and are dependant upon the structure of the pasta, and heating and cooling times.

Boiling RS3 will not easily free it for digestion, as it will RS2. In fact, moist heating will encourage the starch molecules to swell then rearrange themselves as they cool, making this starch almost entirely resistant to digestion by pancreatic amylases. Another unique feature of RS3 ... repeated heating and cooling cycles will further increase the RS content.

RS4 - Starch that is resistant to digestion because it has been chemically modified. Bonds other than naturally occurring α-(1-4) and α-(1-6) are formed. Examples are commercially made breads, cakes, crackers, etc. that contain "modified food starch".

I expect to see, as the benefits of RS accrue, more processed foods containing higher amounts of RS4 and advertising this fact prominently. Since RS4 does not occur in nature, I'm wary of it. It reminds me of the early excitement over partially hydrogenated oils ... whose trans-configurated bonds were later found to be unhealthful.

Here's an excerpt of a table from Sajilata et al's, Resistant Starch - A Review:

Note: Just because we (human enzymes) don't digest it doesn't mean that RS exits our body completely undigested. The bacteria in our colon have enzymes which break down RS, freeing bits of glucose (which we absorb), and producing bits of fat (which we absorb). So RS is not calorie-free. When compared to digestible starch, RS provides about 50% fewer calories. (DS: 4 cal/gram, RS: 2 cal/gram)

Snapshot Of A Moving Target

The numbers in the above table are only a snapshot of a moving target. It's difficult to pinpoint the exact amount of RS in a food because so many factors affect it:

Wikipedia lists a regular (not green) banana as having 4.7 grams RS. That accounts for almost 50% of its starch content (excluding sugars and traditional fibers). But the less ripe the banana, the more RS it would contain. I can see the difficulty in creating tables. Maybe that's why I can't find many. Please email me if you see some. None of this makes it easy to predict how much insulin a person with diabetes might need when they add up all the carbohydrate in a meal. But it does put to rest the idea that all non-fiber carbohydrate in a meal gets converted to glucose and enters the bloodstream. Now that this background info is out of the way, I hope to visit some more exciting facts about resistant starch. I'm easily entertained.
________
Posted by Bix at 4:55 PM

I have several questions:

3) I, too, have been looking for an exhaustive table of foods showing the various amounts of RS they contain, but have not had much luck. I am trying to get as much RS into my diet as I can without the use of Hi-Maize, as it is horribly expensive, not to mention the cost of shipping.

4) I have not seen cooked bananas mentioned on any websites that talk about RS. Does cooking a green banana destroy the RS, or increase it once it is cooled, or neither?

In reference to how heating-and-cooling cycles increase resistant starch, here's a crude way I have of thinking about it ...

When I was young we used to make rock candy. You heat sugar in water then dangle a string in the water as it cools. Sugar crystals form on the string.

If you drank the sugar water, your digestive enzymes would attack the little bits of dissolved sugar quickly, passing them on to your blood stream = spike in blood glucose.

If you swallowed the bits of rock candy instead, your digestive enzymes would have a difficult time getting to the center of the rocks. Some of the rocks would make it through to the colon undigested = slower rise in blood glucose.

Each time you gently heat and cool the same water, the rocks get denser or harder = more resistant to digestion.

(Rock candy is not the same as starch. This is just my own visual aid.)

Yes, I would add any any spices or oil after the starch (say, pasta or potatoes) have cooled - so that they would not interfere with rearrangement of starch molecules while cooling.

The banana question ... I would guess that the starch in the banana would be more resistant to digestion when eaten raw, uncooked, unprocessed. Processing the banana into something like a banana bread is probably not going to provide the same starch structure.