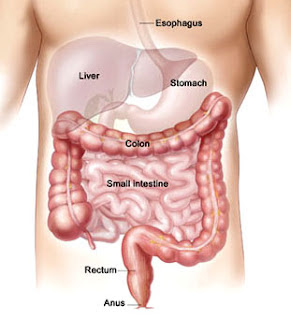 Given the heated interest in resistant starch (RS) these days, lab rats' diets have been getting pretty darn starchy. And by the looks of it, their colons are healthier for it.

I've read a number of studies about the benefits of RS for the colon. Below are three recent ones. It's interesting to note that the substance used to initiate and promote cancer in the rats' colons, so researchers can study the effects of a hypothesized protective substance, in this case RS, is often animal protein, in the form of meat and especially casein. Casein is the main protein found in milk and dairy products.
________
High Red Meat Diets Induce Greater Numbers Of Colonic DNA Double-Strand Breaks Than White Meat In Rats: Attenuation By High-Amylose Maize Starch (Carcinogenesis, 2007)

Rats were fed combinations of red meat (beef) and white meat (chicken), with and without RS.

"Both red and white meat increased colonocyte SSB and DSB dose dependently but damage was substantially greater with red meat." (SSB and DSB are harmful breaks in DNA strands.)

"[RS] induced increases in large bowel SCFA, including butyrate, and significantly lowered concentrations of phenols and cresols." (SCFA is an acronym for short chain fatty acid.)

"Dietary RS protects against [colonic] damage and also against loss of the mucus barrier, probably through increased butyrate production."

Rats were fed varying amounts of casein (milk protein) or red meat, with and without RS.

"As expected, high dietary casein caused a 2-fold increase in colonic DNA damage compared with a low casein diet and reduced the thickness of the colonic mucus layer by 41%."

"Addition of RS to the diet abolished the increase in DNA damage and the loss of colonic mucus thickness induced by either high protein diet."

"Because DNA damage is an early step in the initiation of cancer, these findings suggest that increased DNA damage due to high dietary protein as cooked red meat or casein could increase colorectal cancer risk but inclusion of resistant starch in the diet could significantly reduce that risk."

________
A Synbiotic Combination Of Resistant Starch And Bifidobacterium Lactis Facilitates Apoptotic Deletion Of Carcinogen-Damaged Cells In Rat Colon (The Journal of Nutrition, 2005)

Here, researchers were investigating whether some probiotics (live bacteria ingested with the goal of changing the type and size of bacterial colonies in the colon) are more cancer protective in the presence of a prebiotic (in this case resistant starch).

Rats were given Lactobacillus acidophilus and/or Bifidobacterium lactis, with and without RS.

"The synbiotic combination of RS and B. lactis significantly facilitated the apoptotic response to a genotoxic carcinogen in the distal colon of rats. It appears likely that ingested RS acts as a metabolic substrate, thus creating the right conditions for B. lactis to exert its proapoptotic action. Because the synbiotic combination of these agents facilitates the apoptotic response to DNA damage by a cancer initiator in the colon of rats, it warrants further study for its capacity to protect against colorectal cancer."

Interestingly, the beneficial effect (apoptosis) was not see with either bacterium or RS alone. You had to have the combination of RS plus the bacterium B. lactis. (The bacterium L. acidophilus was not beneficial under any circumstances ... RS or no RS.)
________
Mechanism: How RS Is Thought To Be Protective

For some background on RS, you can see this post.

RS is simply a carbohydrate that passes through the stomach and small intestine, arriving in the colon where it is fed upon by resident bacteria.

One group of compounds produced by that bacterial fermentation is short chain fatty acids (SCFAs). They include acetic acid (2-carbon), propionic acid (3-carbon), butyric acid (4-carbon), lactic acid (3-carbon) among others ... usually with a length of up to 8 carbons.

The specific fatty acids produced are dependant upon the form of raw material (carbohydrate) and the strain of bacteria. Resistant starch produces higher amounts of the SCFA butyrate than other fermentable carbohydrates (such as oligosaccharides). This is a key difference since butyrate is the preferred energy source for the cells of the colon.

Eating SCFAs directly has not been shown to provide the benefits seen here since SCFAs are absorbed in the small intestine ... before they reach the colon.