Thoughts On Meat And Cancer 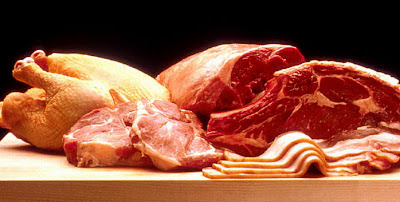 Some diagnoses of cancer have hit my family in the last few months. It's been a trying time. I've been especially keen to understand why, so I've been pouring over research. One dietary item keeps popping up ... meat. I don't know what it is about meat ... heme-iron, hormones, a type of fat, environmental toxins that are dissolved in animal fat, carcinogens produced via cooking, etc. But the association is common in my reading.

We can't ethically feed meat to someone until they get cancer. So there aren't clinical trials, just epidemiological studies, and those can always be devalued. Even I question some of their conclusions. Still, over and over, cancer is seen in populations that eat the most meat. And the mechanisms of action hypothesized for this link make sense to me.

In the absence of a clear, indisputable guideline, and in the presence of this association, how is someone with cancer to eat?

Fitting Low-Carb Into The Picture

I believe in the health benefits derived from eating a low-carb diet. That's not to say I believe in eating a low-carb diet. As I've said before, I don't believe carbohydrates are the problem. The problem is blood glucose and hormones (e.g. insulin). Since carbohydrates have such an impact on them, I can understand where the idea of limiting carbs came from. However, we still don't know the long-term effect of this dietary choice.

While science elucidates further the meat:cancer link, I think it would be prudent to reduce my meat intake, an intake that has risen to at least once-a-day since discovering my impaired glucose tolerance. Once-a-day meat intake has been linked to some of the highest rates of cancer. I respect that some find this link tenuous bordering on meaningless. I'm not willing yet to discard its implication.

How can I derive the benefits of eating low-carb, but still eat carbohydrates -- a situation I'm faced with when I cut back on meat?

The problem to me is not carbohydrates per se. The problem is:The worst scenario, that is, the worst of all of the above combined, can be found in the consumption of a cold, liquid, high-fructose-corn-syrup sweetened beverage consumed every few hours. You may as well have an IV of sugar hooked up to your arm.

In my mind, eating a "low-carb" diet -- one that virtually eliminates foods that contain carbohydrates, and one that is rich in foods like meat, fish, dairy, and eggs -- is a patch, a symptom-alleviator, not necessarily or unquestionably the best way to eat.