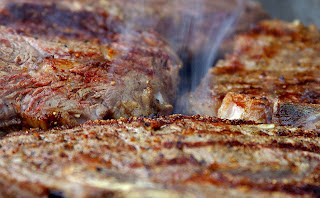 I'm surprised by what I'm discovering about the possible carcinogenic effects of meat. I'm also surprised that these points weren't raised in any of the literature I read so far surrounding low-carb diets, which almost universally promote meat consumption. I've been experimenting with low-carb diets as a way to manage my blood sugar. But with the recent diagnoses of cancer in my family, I'm revisiting their safety.

It's difficult to find material that isn't biased. Where are the people who approach this without having made up their mind? Where are all the scientists? It's not as if there is overwhelming evidence that meat, especially red meat, is or is not carcinogenic.

As I stated in my previous post, most thinking on the link between meat and cancer in humans comes from epidemiological studies. These studies look at large groups of people, tens of thousands, and note the incidence of cancer pursuant to a certain lifestyle choice, in this case, meat consumption. Unfortunately, it's not easy to sift out other influences. Maybe people who ate the most meat also smoked the most or exercised the least - and maybe it was the smoking or inactivity that caused the cancer, not the meat. Good epidemiological studies adjust for these factors, known as confounders. But they can never account for all of them.

A more telling study is a clinical trial, where a substance hypothesized to cause cancer is introduced and cancer formation or progression is noted afterwards. Not since the Tuskegee Study, which ended in this country in 1972, have such harm-inducing trials been intentionally conducted on humans. Well, not without participants' informed consent. 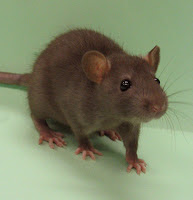 We do, however, continue to conduct harm-inducing trials on animals.

Below are a few studies I found that implicate meat in the formation of colon cancer in the rat or mouse.

"This study is the first to show that meat can specifically promote colon carcinogenesis."

Dietary meat significantly increased colon carcinogenesis compared to a meat-free diet, and was directly proportional to the amount of heme in the meat (see study #2 for a definition of heme). All meats in the study: chicken (low-heme), beef (medium-heme), and black pudding (blood sausage, high-heme), promoted carcinogenesis.
________
2.  Meat And Cancer: Haemoglobin And Haemin In A Low-Calcium Diet Promote Colorectal Carcinogenesis At The Aberrant Crypt Stage In Rats (2003)

Some good news: Carcinogenesis was inhibited by dietary calcium (equivalent to ~5347 mg/day in humans, 427 mg/day or less was not protective), dietary antioxidants, and dietary olive oil (which contains antioxidants). These act to decrease the oxidation of fat or lipids in the colon.

* Heme is the iron-containing unit of hemoglobin in red blood cells, and myoglobin in dark meat such as beef and pork muscle. There is some hemoglobin in white meat. Heme is what is presented to the colon after digestion of dietary hemoglobin and myoglobin.
________
3.  Heme Is A Potent Inducer Of Inflammation In Mice And Is Counteracted By Heme Oxygenase (2001)

Heme induced gut inflammation in mice. It does so by up-regulation of adhesion molecules, an increase in vascular permeability, and granulocyte infiltration. Chronic gut inflammation may contribute to the progression of precancerous growths. 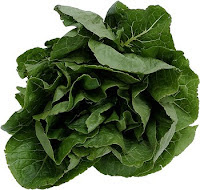 Either spinach or an equivalent concentration of chlorophyll prevented the detrimental cytotoxic and hyperproliferative effects of dietary heme in the colon.

Scaling this effect: A human would have to consume about a pound of spinach daily to take in enough chlorophyll to see this protective effect.
________
In sum:For the time being, I've been limiting my focus to just meat and cancer, particularly colon cancer. But I can't help noticing in my research that while calcium has been shown to inhibit colon carcinogenesis (see above), the protein in milk, casein, has been shown to promote colon carcinogenesis. I'll probably look at that link next.
________
Posted by Bix at 1:11 PM

I'm just looking at this study now. Although it says that "A bacon-based diet appears to protect against carcinogenesis," it compared that diet to a lard-and-casein (milk protein) diet.

So, dairy led to more colon cancer than bacon?

So you're saying I should lay off the Bacon Flakes for breakfast? Bummer. :)