In response to my post on drying pears, Zombie (possibly NSFW :) asked:

Q. Does the drying out affect the nutritional value any?

A. Some, yes. Although, since drying removes primarily water, many nutrients remain intact. The drying method is important. Lower temps (don't go over 145ºF), shorter drying periods (cut fruit into smaller pieces), and use of a preservative all conserve nutrients. I use ascorbic acid as the preservative. Sulfur compounds are often used because they're so effective, if toxic. Unsulfured or non-preserved dried fruits are lower in nutritional content.

A plus side to drying is that nutrients become concentrated. Minerals (iron, calcium, potassium, magnesium, zinc), fiber, and taste! are all provided in greater amounts, per volume, when compared to the original fruit. Of course, calories concentrate too.

But you raise a good point. What about nutrients whose properties we're only recently discovering? How much of an antioxidant punch is left in dried fruits? I went looking, and the answer was surprising.

Many people think of vitamin C or E in a food as the primary antioxidant. In truth, there are hundreds of antioxidant compounds in foods, each with their own properties. For example, the vitamin C in a tomato has been shown to degrade upon heating, yet another of its antioxidants, lycopene, actually increases in bioavailability after heating. Something similar has been measured in a Russet potato, where baking for 50 minutes decreased levels of some antioxidants and increased others. To add more confusion, these compounds have been hypothesized to act synergistically, or in an integrated fashion, when performing their radical-quenching activities.

So, they really need to be viewed as a unit. Wu et al. (2004) (pdf) did just that when he measured total antioxidant capacity in 28 foods. Here's what he found (Click for larger): 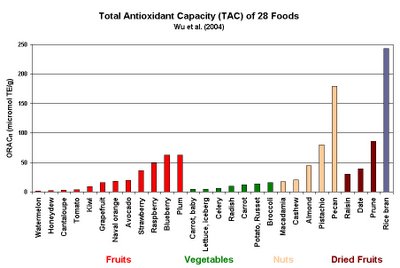 ORAC: Oxygen Radical Absorbance Capacity - a measure of a food's antioxidant strength.
Take a look at the plum vs. the prune (dried plum). Gram for gram, the prune had a higher total antioxidant capacity (TAC) than its fresh counterpart. You would expect this since the plum has a higher moisture content. But if drying had a significant detrimental impact on TAC, this might not be the case. I'm a little disappointed he didn't measure the TAC of grapes. Raisins are my undoing.

While you're looking at this chart, note the antioxidant power of nuts. Maybe you're thinking, as I did, that it must be the fat in nuts which is providing all that antioxidant effect. Curiously, it's not. Wu found the water-soluble components in nuts had far greater radical-fighting ability (42 times greater for pecans) than nuts' fat-soluble components.

This is one more reason to opt for foods, dried or not, over supplements.
Posted by Bix at 9:23 AM