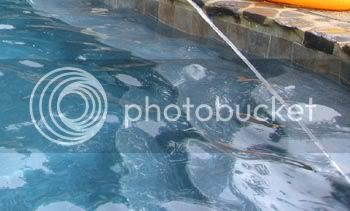 Woe for the lack of a picture. I was a little busy wielding the tongs to be pressing the shutter. So here's another refreshing little memory of our Independence Day 2005 that has nothing at all to do with shrimp or barbequing. The stream shooting across the right side of the frame is, well, you know.

Since I designed these recipes in my head, and since this is my first attempt at documenting them, amounts may not coincide with amounts that went into the product we ate. I'll do my best. Read that as your license to experiment.

I started with six pounds of raw shrimp - peeled, deveined, tails left on. They were relatively large, 16-20 shrimp per pound. Those were divided into three, 2-pound groups each receiving a different marinade. One I called "Asian" although it may have nothing to do with true Asian fare. One I called "Mexican". Again, who knows just how south-of-the-border my Mexican shrimp tasted. And one I called "Plain". That was probably the most accurately defined of the lot, if you discount salt and pepper.

1   Whisk together first 5 ingredients - oils, tamari, garlic, and grated ginger root. Whisk in next 9 ingredients, the dry spices and sesame seeds. Add the shrimp. Toss to coat. Refrigerate until ready to grill or for at least an hour.

Note: Don't add acidic ingredients to the marinade. Lemon juice, vinegar, and acidic fruits can denature the proteins in the shrimp making them ragged and mushy.

2   Preheat grill to high, at least 500ºF. Place grill pan inside grill while preheating or at least 5 minutes before ready to use. (You want the shrimp to sear when they contact the hot pan.)

Note: We used a gas grill. A charcoal grill would produce pretty dandy shrimp too, but are likely to cook faster so keep an eye out for the telltale curling.

Since I was cooking in quantity, I chose not to skewer the shrimp. A grill pan comes in handy for times like these, especially for smaller pieces of food. But if you're only cooking a pound or so, shrimp this size lend themselves to skewering and will develop a nice grilled taste when cooked as a kabob.

3   Add one pound of shrimp to the heated grill pan, stir once or twice and cover for 2 minutes. Stir after 2 minutes and cover again. One pound cooks in about 6 minutes.

Note: Don't crowd the shrimp or they'll end up steaming instead of grilling; thus the 1-pound at a time method. Throw this recommendation to the wind if your grill pan is wide enough to double as a soccer net.

Try to keep grill lid closed between stirrings to conserve heat. If the grill cools too much while the shrimp are cooking, they'll end up tasty but a little tough. Shrimp are done when they're still moist inside, turn bright pink and curl - just so the tail begins to meet the head. Shrimp are overdone when they form into twisted little balls of tightly coiled crustaceans, ready to offer your incisors a real workout.

4   Spoon shrimp from grill pan onto serving plate. Squeeze over the juice of half a lemon and sprinkle with scallions. 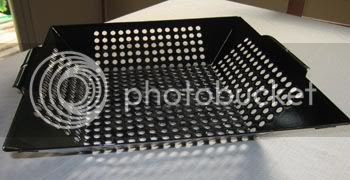 * A special thanks to our host who whisked our used grill pan to the kitchen sink and gallantly scraped and cleaned the burnt sesame seeds from 500-odd holes.
~~~~~~
Ingredients: Mexican

1   Whisk together first 3 ingredients - oil, garlic, and jalapeno pepper. Whisk in next 12 ingredients - the dry spices. Add the shrimp. Toss to coat. Refrigerate until ready to grill or for at least an hour.

2   Grill as in steps 2 through 5 above, except garnish with lime juice and minced cilantro.

Note: I removed the ribs and seeds from the jalapeno before mincing. If you like a nice hot mouth-scorching bite, leave them in.

Any good chili powder could be substituted for the 12-spice blend I list above. Use about 2 or 3 tablespoons and don't forget to include salt. 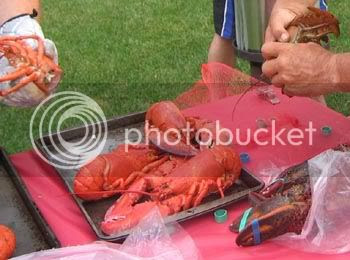 No, my shrimp weren't that big. That's a photo of the day's lobster detail - a task men unceasingly gravitate towards.
Posted by Bix at 8:05 PM