The salmon story is high and wide, and getting bigger. 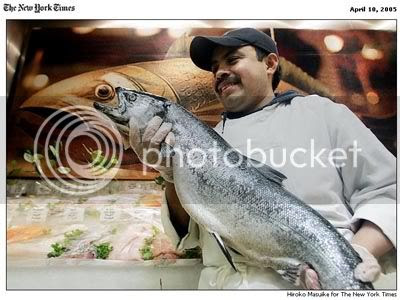 The story in a nutshell:
In March of this year, the NYTs tested salmon sold as wild at 8 NYC stores. Salmon at 6 of those 8 stores were found to be farm-raised, not wild as advertised.

Why is salmon making headlines lately?
The American Heart Association, and the US Department of Agriculture (USDA) along with the US Department of Health and Human Services (HHS) - by way of the 2005 Dietary Guidelines - are recommending we eat fish at least 2 times a week and up to daily (for people with coronary heart disease). One reason is that fish contain more of the heart healthy, inflammation-reducing, mood-mellowing, omega-3 fats than just about any food you can eat. Salmon ranks among the highest on the omega-3 scale. Salmon also tends to have less mercury than other high-ranking fish like mackerel, tuna, swordfish, shark, tilefish, etc.

So, eat your salmon.

But that increases demand for salmon. And salmon aren't found swishing up streams in winter. What to do? Farm them.

But farmed salmon lack the vibrant red color of wild salmon. What to do? Add color to the feed.

But some consumers aren't biting for a fish whose flesh color has been toyed with (The FDA requires salmon whose color has been enhanced by pigment be labeled as such), and whose heart-healthy fats are claimed to contain up to 16 times more cancer-causing PCBs that wild. What to do?

From the NYT's article:
Even if the paper trail is standing in front of you:
Posted by Bix at 7:47 AM