Equal Time in the Salmon Aisle 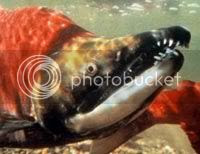 I received an email regarding my post about farmed salmon. Since the sender was kind enough to consolidate his thoughts and pass it on, and since, lets face it, you can never have enough info, I'm passing it on to you.Male Sockeye salmon attracting females with his outstanding hooked jaw and deep rosy blush.
Photo thanks to California Academy of Sciences.
~~~~~~
A friend sent me your recent comments regarding farmed salmon. I have a few comments:

Salmon farmers in the United States use small amounts of antibiotics, about two level teaspoons per ton of product. The same amount of antibiotic per ton of production is used by trout farmers. Since feeding antibiotics reduces growth rate in cold-blooded animals such as salmon and trout, antibiotics are used only when necessary, about twice a year, for ten days per treatment. Conversely, since the same antibiotics promote growth in chickens, they are added to the feed daily.

The Salmofan can only be used to grade flesh color after a fish has been harvested. The Salmofan contains no instructions on how to achieve a desired color prior to harvest.

The Salmofan was originally developed to grade color in wild salmon, as was its precursor, the Color Card. Thereafter, salmon farmers have used the Salmofan for the same purpose as salmon fishermen. The Alaska Seafood Marketing Institute provides similar color patches to fishermen and processors to grade wild Pacific salmon after harvest.

Without added carotenoid pigment, farmed salmon would not be gray. It would be the same color as farmed trout or “white king salmon”.

In North America, the carotenoid pigment canthaxanthin is approved for use as a colorant to many food products, including, soft drinks, salad dressings, fruit juices, jams and jellies, cheese products, imitation crab, soups, candies, tomato products, relishes, and packaged and/or smoked fish and meat to name just a few.

Apparently there are two sides to the salmon story. And the deeper I dig, the larger I find the battlefield. The salmon industry seems to be big business, BIG business. But for crying out loud, I just want to be able to go to my local grocery store and pick up a fillet or two for dinner, with confidence I won't be raising everyone's risk for cancer.

Here are my concerns:

PCBs
I had said that farmed salmon were measured to have 16 times the PCBs of its wild counterpart. I wasn't just picking numbers out of the air. It was reported on the Environmental Working Group's, site (www.ewg.org). They're a non-profit, non-partisan organization who have posted their detailed and convincing report on PCBs in farmed salmon here.

Even the US Environmental Protection Agency (EPA), in their Proceedings of the 2004 National Forum on Contaminants in Fish report worrisome statistics:

"We collected samples of over 700 salmon (about 2 metric tons) obtained from salmon farms in eight regions of the world, supermarket samples from 16 cities in North America and Europe, and wild Pacific salmon of the five major species, and we analyzed them for concentrations of 14 persistent organochlorine contaminants (polychlorinated biphenyls [PCBs], dioxins, and persistent pesticides) and 9 metals. On average the farmed and supermarket salmon had about 10 times the concentration of the organic contaminants that were found in the wild salmon, whereas the metals were not very different."

I don't know about Mr. Waknitz, but when I buy salmon at the local grocery store it says "salmon", sometimes it will say the type of salmon, King or Sockeye, etc. It doesn't tell me specifically from what waters the salmon were harvested, other than Atlantic or Pacific. Only recently will it label it as farmed or wild, and that sporadically. Even if I was told exactly where my salmon was raised, I wouldn't know offhand how that knowledge impacts PCB levels. I envy Mr. Waknitz for knowing that the salmon he may eat is a contaminant-reduced "Farmed Atlantic salmon grown in Puget Sound". (By the way, why is an Atlantic salmon being grown in Pacific waters?)

Flame Retardant
I didn't know that "Wild salmon in Puget Sound also have higher levels of flame retardant than farmed salmon." Again, would it were I could choose to avoid, particularly, wild salmon from Puget Sound. In absence of that knowledge, I'm apt to depend on research such as was published in the August 11, 2004 issue of Environmental Science and Technology. That study reported that levels of flame retardants were "significantly higher in farmed than in wild salmon". 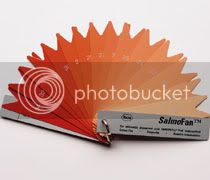 I had said that the SalmoFan was used as a color selection tool by salmon farmers. I wasn't just picking fans out of the air. It was reported on Smith and Lowney's site (www.smithandlowney.com). They are a public interest law firm, representers of a nationwide class action lawsuit that claims major retailers deceived customers by "illegally concealing the artificial coloring in their farm-raised salmon." Details of the lawsuit can be found here.

It's interesting to know the history of the SalmoFan - that it was intended for use in grading. But how is it being used today? Is it true, as Mr. Waknitz says, that it "can only be used to grade flesh color after a fish has been harvested"? Why does Smith and Lowney claim otherwise?

Added Pigment
I am not unaware of canthaxanthin's FDA approval status, nor of its use in a number of artificially colored food products, ones I chose not to address in my original post but ones I'm apt to visit now that I'm reminded of them. What concerns me is the pigment's unnatural addition to the farmed fish's diet without labeling to that effect. Consumers already awash in canthaxanthin from artificially colored foods have no way of knowing, without disclosure, that the pretty pink salmon fillet at the fish counter got that way by means of added pigment, and thus fail to be given information to make an informed choice.

That's all for now. I feel honored to have the NOAA reading my blog. Let me put the word out again ... I'm still trawling for good canned salmon recipes!
Posted by Bix at 10:24 AM