One of my few and self-described "decent" readers (which I interpreted as meaning pretty adept with all things food, as opposed to someone whose target for whipped cream was, is, and always will be ... strawberries) (not that any of my readers are indecent) (that I know of) recently asked me what constitutes a "high-heat oil". He was referring to my post on Braised Lamb Shanks where I designate use of a "high heat oil" to brown the shanks.

Only this weekend I was finding recently published recipes with instructions to heat an oil "until it starts to smoke" before browning a meat. I laid my forehead against my palm and sighed. 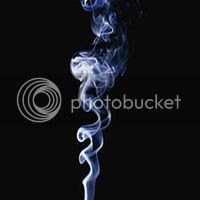 Why is it not a good idea to let your oil smoke?

Present in that smoke is a substance called acrolein. Acrolein is highly irritating to the eyes and throat, and can damage lung tissue. It's a suspected carcinogen. (It's also present in cigarette smoke and car exhaust.) Smoke emitted from overheated fat is an insidious contributor to indoor pollution.

Of course, the goal of browning a meat prior to braising is the development of a crisp, caramelized exterior with a largely uncooked interior. High heat is necessary to achieve that goal since it reduces the amount of time the food is in contact with the hot oil, precluding the tough, dried-out, pork-chop-as-shoe-leather quality that results from overcooking.

What oil to buy?

The smoke point of a fat depends on two factors, its natural composition (dependant on the food from which it's derived), and the type of processing it has undergone.

Unrefined oils, those merely pressed from their source, generally smoke at lower temperatures than refined oils, and are poor choices for high-heat uses. (The "impurities" in unrefined oils which lower the smoke point also give oil its characteristic color, aroma, and flavor.)

Refined oils are exposed to higher temperatures, pressures, and chemical manipulation to extract, filter, bleach, deodorize, and stabilize their final product. I wouldn't use a refined oil, e.g. Wesson, as an all-purpose oil. In fact, I wouldn't used a refined oil for anything other than high-heat frying. Unrefined, cold-pressed oils can do most jobs, including sautéing, without vaporizing to a noxious fume.

Below is a list of oils and their average smoke points. The smoke point of any one oil can vary widely, depending on the growing medium; and harvest, extraction, and processing methods. Generally, refining an oil increases its smoke point by about 100°F. Not to plug a brand, but to plug a brand, Spectrum Naturals make some mighty fine refined oils. They minimize the use of chemicals and high temperatures in their refining process. 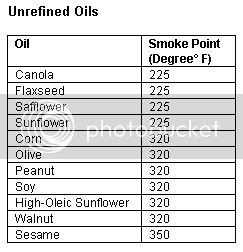 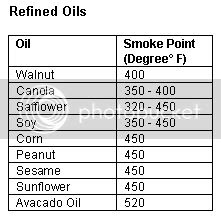 My kitchen, before I broke down and purchased some refined, high-smoke-point frying oil: 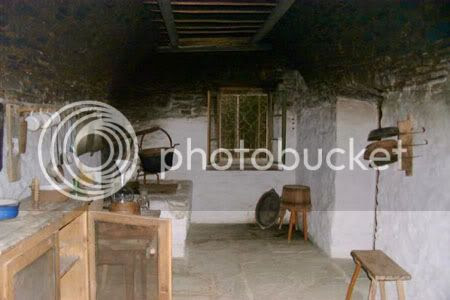