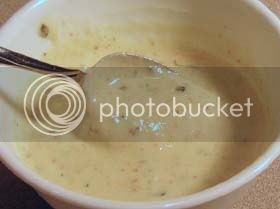 I use this sauce as an accompaniment to spicy grilled chicken or fried fish. It's a cool, refreshing contrast to any strongly-seasoned food, and if you use non-fat yogurt, it offers a lower-fat alternative to many salad dressings.

It didn't occur to me to write about it - it's a simple concoction. But the FRE, who claims that were it not for a fanatic's influence on him he would still be the owner of his 20-something svelte physique, and which fanatic counters that indeed it is because of her influence on him that he has packed on brawn, not blubber, and has retained a sought-after youthful glow, wanted me to post it.

He says: "It's healthy! It's made of all good things. I can smear it on everything and not feel guilty!"

Well, thank you, FRE. But maybe you've just grown to be appreciative of what little fat gets served to you between the plates of steamed vegetables. You're a long-suffering man, how can I not oblige this minor request.

~~~~~~
1    Using a garlic press, squeeze the pulp from the garlic clove into the oil and stir to coat the garlic and infuse the oil.

2    Add the vinegar and mustard and whisk until you have an emulsion, about 30 seconds. Whisk in the yogurt, then add the spices and salt and whisk again. Refrigerate until ready to use.

Note: Here's one place where I prefer dried herbs to fresh. Dried won't taint the color of the sauce. Fresh will turn the sauce pale green. Not that I'm averse to green sauce, but I think the creamy off-white color complements a fish dish better than something resembling guacamole.

Here's how a serving stacks up against the same amount of mayonnaise:

~~~~~~
I was introduced to the thick, creamy raitas while taking a class on Indian cuisine, although there's a variety of these yogurt-based sauces throughout India and the Middle East. They're typically made with whole-milk yogurt which is often strained to form an even thicker product that I know as yogurt cheese. To this yogurt is added, depending on the region, grated cucumber and mint (India), raisins and salted onions (Middle East), olive oil and garlic (Greece), and other dried fruits, nuts, and spices.

While pondering what to serve with a grilled chicken sandwich one day, the idea came to me to combine a raita with a mayonnaise (an oil, egg, acid emulsion). Since I was looking for a low-fat, natural alternative to mayonnaise I used non-fat yogurt instead of the traditional full-fat. This displaced the saturated fat in the whole-milk raita with primarily monounsaturated fat from olive oil. The mustard and yogurt kept the dressing emulsified so there was no need for egg yolk. There's one change I would make to the above recipe (if there were more hours in a day) ... I would drain the yogurt before adding it to the dressing giving the final product a thicker consistency.

If you do have those hours, here's how to make yogurt cheese:

Line a wire mesh strainer with cheesecloth and place over a bowl. Pour 1 or 2 cups of yogurt into the strainer and let drip at room temperature for about 4 hours or until the remaining yogurt has reached the desired consistency. (Volume will be reduced up to half.) Refrigerate.

By the way, this yogurt cheese makes a dandy low-fat cheesecake. But that's another recipe for another day.
Posted by Bix at 1:26 PM

"Low-fat" dressing? You've got two tablespoons of olive oil there, how is that low fat? One tablespoon contains 13 grams of fat! Your macronutrients are all wrong I'm afraid.

The macronutrient breakdown was per serving, not for the whole thing. I thought it was lower in fat compared to mayonnaise.

See ... This was 8 years ago. I wouldn't write this post today, nor, in fact, do I eat this way. No dairy, and truth be told, hardly any oil.

There seem to be nice Anonymouses (Anonymice?) on this blog, and yet there also are the really snarky ones, as in this thread of comments. Where are your manners?

I heard a presenter on CNN the other day invite listeners to visit his Facebook page to discuss, "... and be kind," he said, then changed his mind: "No, in fact, don't be kind! It's more fun that way!"

Being unkind is fun?