This is a repost. The article originally appeared on November 28, 2010. 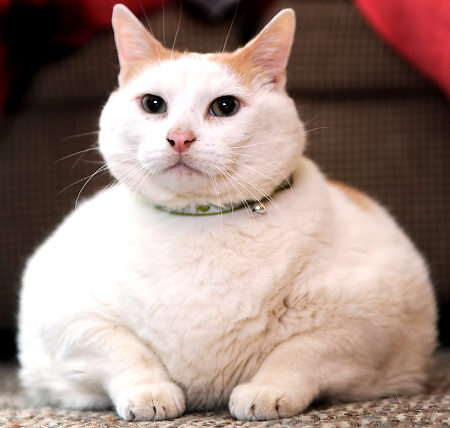 The human population is growing, in number but humans are getting bigger too. Obesity is epidemic. Is it simply that we eat too much? Or move too little? If the cause is something external - say, artificial light at night, or pollutants in air/water/food, or viruses and bacteria, or epigenetic factors (factors that affect genes without any change in DNA) - then perhaps other animals are experiencing a similar plumping.

This study found they are:

Canaries In The Coal Mine: A Cross-Species Analysis Of The Plurality Of Obesity Epidemics, Proceedings of the Royal Society, November 2010

Klimentidis et al. examined data on 20,000 mammals from 24 populations (12 each male and female) from 8 species. They included cats, dogs, mice, rats, monkeys, chimpanzees - all living with or around humans in the developed world:

"Surprisingly, we find that over the past several decades, average mid-life body weights have risen among primates and rodents living in research colonies, as well as among feral rodents and domestic dogs and cats.

The consistency of these findings among animals living in varying environments, suggests the intriguing possibility that the aetiology of increasing body weight may involve several as-of-yet unidentified and/or poorly understood factors."

All 24 populations they studied experienced weight gain. The researchers calculated that the probability of that occurring by chance was 1 in 12 million. 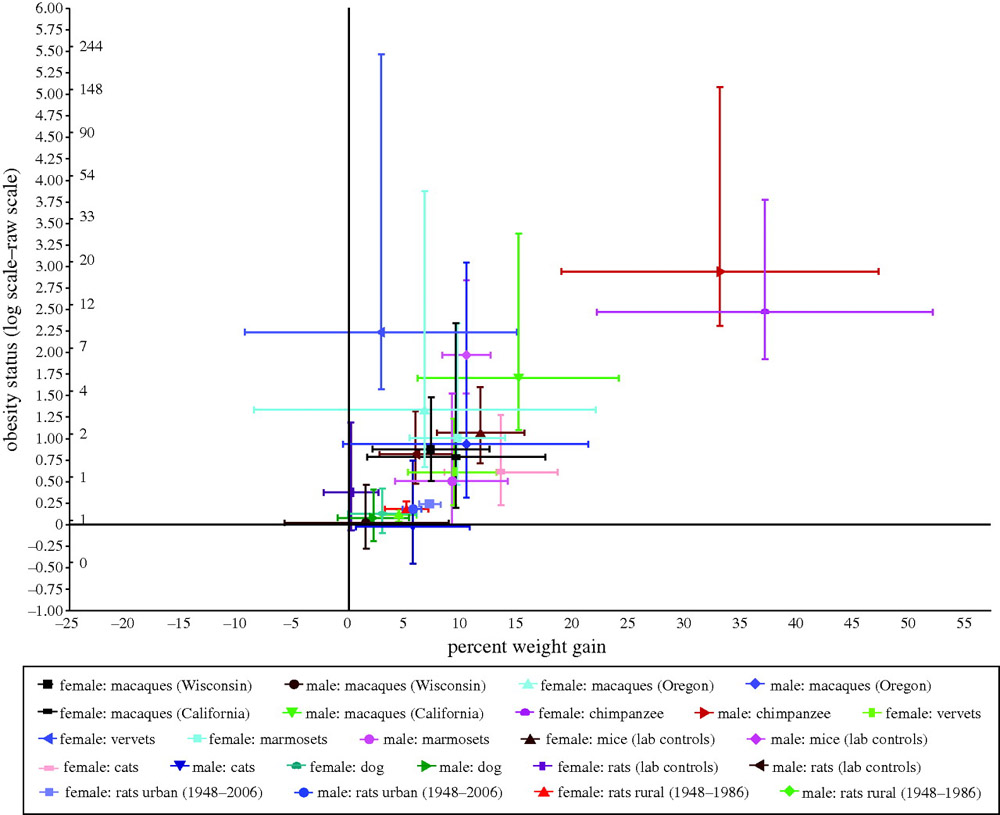 Here's an unusual finding ... Lab animals gained weight over the last few decades even though they were fed the same amount of food:

"But these factors [he was talking about selective predation of wild rats, and rats eating our highly-caloric refuse] cannot account for the findings in the laboratory animals that are on highly controlled diets, which have varied minimally over the last several decades. These animals are typically fed ad libitum, so if weight increases are attributable to increases in food consumption (which is possible), it is difficult to understand why animals in controlled environments on diets of constant composition are consuming more food today than in past decades."

What's going on?Food marketing? You'd be hard pressed to apply that argument to a feral rat. Domesticated dogs on the other hand... And there's this:

"It is also noteworthy that the obesity epidemic has also occurred among children of six months of age and under, an age group for which explanations involving food marketing, less physical education is schools, and more labour-saving devices seem questionable."

What do you think?
________
Photo of Powder, a.k.a. Prince Chunk, the cat who was abandoned on the streets of southern New Jersey in 2008 when his owner's home went into foreclosure. Staffers at the Camden County Animal Shelter say he ate normally despite his wide girth. Prince Chunk died yesterday of congestive heart failure. He was 10 years old.
(The cat's new owners set up the Prince Chunk Foundation to help pet owners keep their animals.)
Posted by Bix at 7:51 AM