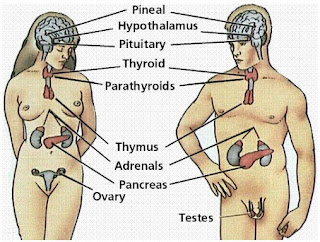 The Endocrine Society, "the world's oldest, largest, and most active organization devoted to research on hormones and the clinical practice of endocrinology," just published an ominous 50-page statement, their first, reflecting the concern building in the scientific community over certain environmental pollutants. (Diagram to the right is of the endocrine system.)

"There is growing interest in the possible health threat posed by endocrine-disrupting chemicals (EDCs), which are substances in our environment, food, and consumer products."
- Endocrine-Disrupting Chemicals: An Endocrine Society Scientific Statement, Endocrine Reviews, June 2009

They presented evidence (animal studies, human clinical trials, epidemiological studies) that EDCs can affect:This is a big deal. The Society is now on record as claiming EDCs are "a significant concern to public health." 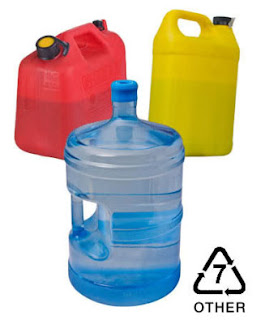 Where are EDCs found?Everyone has been, and is being, exposed.

The Environmental Protection Agency (EPA) has the lead here. They initiated a testing program (from a 1996 Congressional go-ahead) and in April (2009) are still publishing lists of chemicals, mostly pesticide ingredients, to be screened "to determine whether certain substances may have hormonal effects."

Given the Endocrine Society's evidence-filled warning, I think we need to set a fire under the EPA's screening activities. Thirteen years seems like a long time to still be making lists. Although I can see that having reps from "agrichemical companies" and "commodity chemical companies" on the EPA's Validation Task Force might slow things down.
________
The plastics photo I picked up on Hit+Run Crew's blog. Their description of Number 7 plastic:

"Most often refers to PC (polycarbonate) This plastic is most commonly used for baby bottles, five-gallon water jugs, and reusable sports water bottles. It can leach out the hormone-disruptor bisphenol A, especially when heated."

Yes, EDCs are a concern. Many sources produce very low concentrations, but there are so many sources it adds up. Some of the largest sources are actually plant foods, like soy and brassicas. Soy is one of the worst.

In fact, most endocrine disruptors are fat soluble, and are found in greater quantities in hydrophobic materials (such as fat or plastic). These chemicals can also bioaccumulate, and as Rajesh Naz says, become "concentrated higher up in the food chain." such that foods high in animal fats - meat, fish, eggs, dairy - are good sources.

Bix, EDC bioaccumulation in animals may especially be a problem with soy/grain fed animals, which is most animals these days, even farmed fish. My guess would be that fully pastured animals that are not fed soy would have the least contamination, but I haven't seen any data.