Because when they meet in the stomach, things happen.

How we eat is as important as what we eat. Below are some dietary influences that affect digestion, absorption, and subsequent metabolic processes:
Lots to say about that last point, for one... 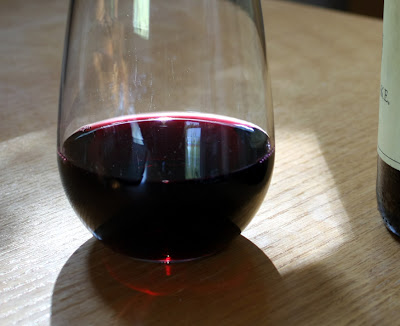 If you're going to eat meat, or any food containing oxidized fat (French fries, bottled oils, rancid nuts), and you're going to drink wine, it's best to do them at the same time. When we swallow a partially oxidized fat, it undergoes further oxidation when it meets acid and other chemicals in the stomach. In fact, oxidation takes off in a chain reaction there. A number of compounds are formed which have been shown to damage gastrointestinal cells. Some are absorbed and can be detected in plasma where they wreak havoc - contributing to chronic diseases such as atherosclerosis, diabetes, arthritis, and certain cancers. These oxidized compounds are especially elevated following a fatty meal. It looks like red wine can prevent products of oxidation from being absorbed, and from forming in the first place. Some studies below.

________
The Stomach As A “Bioreactor”: When Red Meat Meets Red Wine, Journal of Agricultural and Food Chemistry, June 2008 In this study, rats were fed red meat turkey cutlets along with red wine concentrate. As expected, the presence of oxidized compounds in the stomach (indicated in part by concentrations of malondialdehyde: MDA) increased greater than two-fold in rats fed just meat with no wine. Plasma levels of MDA increased by 50% (so it was absorbed). However,


"The consumption of the same meat cutlets simultaneously with concentrated wine totally prevented the elevation in plasma MDA, and even reduced it by 34% below basal level."


So, the entry of oxidized compounds into the blood after eating was not only completely prevented, but reversed - wine-fed rats ended up with lower levels than before they ate.


"These findings explain the potentially harmful effects of oxidized fats in foods and the important benefit of consuming dietary polyphenols during the meal."

________
Here's a study in humans by the same authors, same time period, similar results: A Novel Function Of Red Wine Polyphenols In Humans: Prevention Of Absorption Of Cytotoxic Lipid Peroxidation Products, FASEB Journal, 2008 Humans were fed either:
* The red wine used to soak meat was an alcohol-free concentrate. Without wine, levels of MDA in plasma increased over three-fold after eating. In the 2nd meal, there was a 75% reduction in MDA absorption. In the 3rd meal, absorption of MDA was completely prevented.


"The harmful results of the consumption of high-fat, partially oxidized foods can be prevented by the addition of food-derived polyphenols to the meal, as was clearly demonstrated by our results."

________
One more study, with similar results: "In the presence of catechin or red wine polyphenols ... lipid peroxidation was totally prevented." The Stomach As A Bioreactor: Dietary Lipid Peroxidation In The Gastric Fluid And The Effects Of Plant-Derived Antioxidants, Free Radical Biology and Medicine, 2001
________
Of course, many foods have polyphenolic compounds: fruits, vegetables, tea, coffee. Wine isn't special in this regard. And you have to contend with its alcohol. Unfortunately, alcoholic beverages in any form are strongly linked to breast cancer. But the mechanisms by which red wine is thought to prevent harmful effects from oxidized fats may not be generalizable to other polyphenolic-containing foods ... Which leads us back to imbibing.
________
Results of wine poll:

Wine is considered a healthy component of the traditional Mediterranean diet. And, traditionally, it is comsumed at mealtime.

It looks like the researchers are elucidating more of the biochemical mechanisms that explain why the Mediterranean diet might prolong life and prevent certain chronic diseases.

Welcome, Steve. I actually spent a nice chunk of my spare time reading about this. The mechanisms are surprising. Apparently, polyphenolics aren't well absorbed, so they act mostly along the gastrointestinal tract, locally.

Yet, our plasma antioxidant capacity increases anyway, after we drink wine. And the alcohol (ethanol) seems to be an important ingredient for that:

Glycerol and Ethanol in Red Wine Are Responsible for Urate-Related Increases in Plasma Antioxidant Capacity
http://www.clinchem.org/cgi/content/full/52/4/785

posts like this is why I read your blog.
btw nice glass, stemless rules!

I like a good glass of wine with dinner. You gave me another good reason to enjoy it. I wonder if beer has a similar effect. There is nothing like a beer and brat with sauerkraut.

Here is a good video on meat http://meat.org