My previous post about the discovery of granaries which were thought to predate agriculture (domestication of plants) by about 1000 years, included a photo and illustration of one of the granaries.

"The outer walls of the structure, which was constructed ~11,300 - 11,200 BP, are defined by a partially preserved mud wall. Inside the structure are used grinding stones in upright position that have been notched to hold wooden beams." 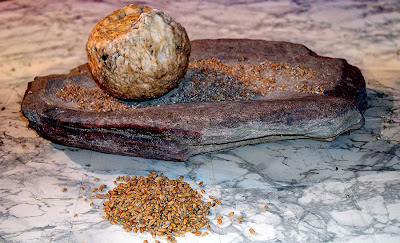 Click to enlarge.
That looks like barley to me, but I'm not sure, could be wheat. The seed also looks too large and starchy, too domesticated, to be a good representation of the wild grains found at the site.

It makes me wonder just how long ago humans were eating processed grains. By the looks of this, and from my reading, it was long before farming took off.
________
Posted by Bix at 8:14 AM

in the above link i have used the 3rd picture mostly to grind spices and making a paste of ginger, garlic and coconut - makes a tasty chutney

the 11th picture is used for grinding grains.

when we were young and before the electric grinder ( mixer )came home my mother grindied various dals to make batter - to make pancake like flat bread.

a similar one but a pestle with a long stick was used to dry ground spices in huge quantities.

and stone ground in such mortars is heavenly ( no grinder can substitute this ) it gives daily exercise to the upper muscles - phew!

Anrosh ... those are fantastic photos. The similarity is incredible.

I am privileged in that I have electricity. It does go out maybe 6 or 7 times a year. What a lesson those times are.