Prehistoric Granaries: Humans Have Been Eating Grain For A Long Time

What were humans eating before they domesticated grain? An exciting discovery in Jordan reveals that ... they were eating grain ... at least 1000 years before grain was domesticated. Specifically, wild oats and wild barley.

The finding was described in an article published in last month's Proceedings of the National Academy of Sciences:
Evidence For Food Storage And Predomestication Granaries 11,000 Years Ago In The Jordan Valley

What was found:
Very sophisticated, raised-floor food storage huts, or granaries. Here's an excavation of one of the granaries: 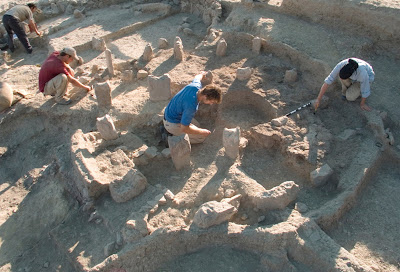 "The outer walls of the structure, which was constructed ~11,300 - 11,200 BP1, are defined by a partially preserved mud wall. Inside the structure are used grinding stones in upright position that have been notched to hold wooden beams."

Here's a reconstruction of the structure above: 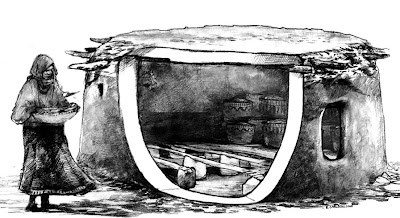 Click to enlarge.
The cut out in the wall is for illustration purposes only. Entry was had by that little hole to the right. The picture shows:

"... upright stones supporting larger beams, with smaller wood and reeds above, and covered by a thick coating of mud. The suspended floor sloped at 7° and served to protect stored foods from high levels of moisture and rodents."

Sloping floors, air circulation, with "many granaries in use simultaneously" - and this was 1000 years before agriculture. Where did they get all this grain? From foraging, selective gathering, and rudimentary cultivation.

So, oats and barley (there is also mention of lentils) were not new food sources, even then.

There's another aspect to this story. Food storage, as evidenced by these granaries, contributed to a marked change in human way-of-life - a bump in the civilization curve. Successful storage of grain led to domestication of cereals and to farming, but also to:The authors describe how food storage "represented a critical evolutionary shift in the relationship between people:"

An excess or surplus, that is to say an amount or quantity beyond what is considered normal or sufficient, results in production beyond the immediate annual household needs. To be a true excess or surplus, it is necessary to produce enough yearly food resources to cover the subsistence needs of the group, to secure sufficient stored food to overcome any seasonal or yearly shortage, and still have remaining amounts that can be used for trade, exchange, or some form of social currency."

Indeed, the granaries above were communal structures, built separate from living quarters and accessible by many. Over the next 2000 years, by about 9500 BP, food storage was incorporated into houses, "reflecting evolving systems of ownership and property."

All that grain - I wonder what, if any, chronic diseases they suffered.

What a fantastic (article) find.

"All that grain - I wonder what, if any, chronic diseases they suffered."

Interesting thought. I wonder if skeletal/teeth analyses could provide any answers. I am trying to eliminate all grains and cereals from my diet.

I doubt the unrefined unprocessed wild grain that they used would affect their health in the least bit, try eating wild rice and u will see the difference.

I've eaten boiled whole wheat, "wheat berries" they're called. I'll say this, it takes a while to chew through a bowl of them. Even cracked wheat berries take time (for me). A bowl of rice or barley, same thing.

Grind the seeds to a powder though and I could eat many times that at a sitting.

Could the diseases possibly be linked to the sedentarism accompanying grain-grinding, rather than the whole grain food itself?

I don't understand how this would lead to a more sedentary lifestyle. Something's not 'clicking' to me. One would think they would have to work harder to gather, 'process', store said grain. They definitely weren't lazy people.

It's a good point. And there were so many changes happening together, and dependant upon one another, maybe it's difficult to say x caused y.

Some diseases I know were related to increased population density. Poor sanitation worsened spread of communicable diseases. You also have the problem of kept animals (now that the population was sedentary), and bugs jumping from animals to humans ... H1N1-like.

Maybe sedentary in that they didn't travel as much (to find food).

I've read a few accounts that Paleolithic humans were active only 3 or 4 hours each day. That they took a lot of rests.

Jim, do you eat beans? or nuts?

Bix, unfortunately, I don't always practice what I preach. My list of dietary sins is too long to list.

What do you think about grans fermentation? Traditional cultures in africa still eats porridge of fermented millet. Maybe something similar was made with wild oats and barley, so it was healthful and "eatable" even without fire... Could be?