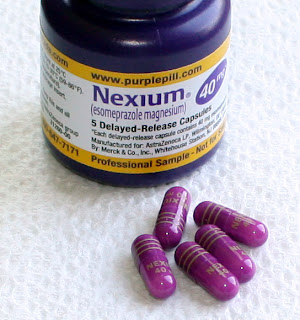 Things aren't looking well for Nexium, Prilosec, Prevacid, and other heartburn remedies that work by inhibiting the stomach's acid-producing proton-pump.

A study from the May 27 issue of the Journal of the American Medical Association (JAMA):
Acid-Suppressive Medication Use and the Risk for Hospital-Acquired Pneumonia

This was a big study. It analyzed data from 63,878 hospital admissions. The number of variables for which it controlled (which could confound the association) - was staggering. They included:This isn't the only evidence. Previous studies found a link between community-acquired pneumonia (in non-hospitalized people) and acid-suppressing meds.

2. PPIs such as Prilosec have been shown to inhibit the ability of white blood cells to disable infectious cells, both in the test tube (in vitro) and in the human (in vivo). Here's just one study:
Omeprazole Inhibits Natural Killer Cell Functions, Digestive Diseases and Sciences, 2007

"Omeprazole [Prilosec] significantly reduces natural killer cell functions. This finding suggests that omeprazole may also have some effects on the other systems in addition to parietal cell acid secretion."

PPIs are only indicated for short-term use, 3 or 4 weeks. For those with erosion in the lower esophagus, the time is extended to a few months to encourage healing. They're not indicated for long-term use. Nonetheless, people use them on a long-term basis - for several years.

Long-term adverse effects are accumulating in studies:
________
I ask myself (your input is welcome):PPIs are very effective at reducing stomach acid. However, at what point do the costs outweigh the benefits? The authors of this study projected the number of cases of pneumonia (180,000/yr) and pneumonia-caused death (33,000/yr) from acid-suppressors used in hospital settings would likely surpass the incidence of GI bleeding:

"It therefore seems unlikely that the benefit of these medications for gastrointestinal bleed prophylaxis would offset the risk."

The tactics used by pharmaceutical companies to promote drugs that have not been adequately tested, and to market drugs for conditions for which the drug is not indicated - tactics that I outlined in my post, Corrupted Research - seem to be at play here.
________
Photo: Bix
Posted by Bix at 2:52 PM

Very interesting. As usual, long term drug usage tends to produce unwanted side-effects. Another reason to avoid drugs as much as possible.

I have found that when on rare occasions I get indigestion, that drinking a small amount of kefir settles my stomach very quickly.

I've read that many people, especially the elderly, tend to have inadequate stomach acid and that is often the cause of indigestion, heart burn, and even reflux. Acid inhibitors and antacids might actually aggravate this situation. It would be interesting to see a study of the frequency of lack of proper stomach acid in relation to indigestion. I avoid drinking much liquid with meals to maximize stomach acidity.


A Very Low-Carbohydrate Diet Improves Gastroesophageal Reflux and Its Symptoms

My entire family suffered from acid reflux and got it under control with various versions of the paleo diet. I did this because I was on PPIs for a long time and ended up with a serious infection that was not normal for a 21 year old to have. But over the years I've found that counting carbs is less important than avoiding grains.

I have also noticed that since adopting the paleo-style low carb diet that I detail in your June 3 post, my GERD has all but disappeared. I have read that grains digest in the upper small intestine, and that process generates the gas that causes GERD.

Regarding long-term use, my wife has Barrett's Esophagus, a precancerous condition where the cells of the lower esophagus are mutated, often as a result of undiagnosed, minor GERD due to hiatal hernia. She's been told she's on Omeprazole for life. I wonder if anything can be done surgically to the hernia instead?

"John Clarke, assistant professor of medicine and director of esophageal motility at Johns Hopkins University," said if you have to take a PPI long-term, "take calcium and Vitamin D and a bisphosphonate," to preserve bone density.

Also, the vitamin B12 in a supplement (as opposed to the B12 in food) doesn't need stomach acid to separate it from food protein, it's more absorbable in a low-acid environment, such as when you're taking Prilosec. I suspect they'll start adding B12 to the PPIs, but a supplement now wouldn't hurt. There are a few other minerals that are absorbed better in an acid environment. Iron comes to mind. So a multi that includes B12 and minerals would cover a few bases.

I agree with Bryan; long-term drug usage produces unwanted side effects (and possible dependency. Both dangerous).

Should something like this be available only via prescription? (if people are abusing it.)

I'm going to go out on a limb here and say the prescribers (as well as drug companies) are complicit in the abuse.

But it's tricky territory. Lots of people, millions, use acid-suppressors and find great relief. (Or are prescribed them for a condition like Barrett's - distinct from just reflux because it may have no symptoms.)

They stop them, the discomfort returns, and they start them again. I see it like having chronic headaches. You don't want to limit access to aspirin if it helps, but you don't want someone growing dependant on higher doses or stronger pain relievers. I think you want to find the cause of the headache.

Have humans always had chronic heartburn? And we're just now medicating it? (If it's diet, what exactly about diet?)

Heartburn can be relieved by taking a teaspoon of vinegar

This makes sense. I'd been taking Prevacid for the last 5 yrs. I stopped in January because I wanted to see if it was causing my 20 lb per year weight gain. It was hell to get off this med. I went off slowly and used soy milk to calm my stomach. It took 3 months. I have not gained a pound since and have lost 4 so far this month. The thing that makes sense from this article is that I had pneumonia 7 times in the 5 winters I was taking prevacid. This year I did not. I'm calling my 85 yr old dad to ask him to stop taking this crap.
thanks for this article