When a former editor-in-chief of The New England Journal of Medicine, says:

"It is simply no longer possible to believe much of the clinical research that is published, or to rely on the judgment of trusted physicians or authoritative medical guidelines. I take no pleasure in this conclusion, which I reached slowly and reluctantly over my two decades as an editor of The New England Journal of Medicine."

It's worth paying attention. 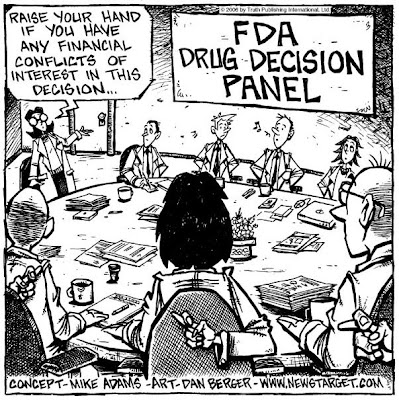 That quotation is by former NEJM editor Dr. Marcia Angell from her review of three recent books which (including one she authored herself) shine a light on the influence businesses, in this case drug companies, have on research that appears in even the most respected, peer-reviewed science and medical journals ... and how businesses influence the behavior of medical professionals, in all fields - healthcare, research, academia, and government.

I'll list the books she was reviewing because I think their titles help tell the story:
________
Selling Pills On Inference Instead Of Science

The field of psychiatry is particularly vulnerable to disease-mongering since diagnoses are largely subjective. However, Senator Charles Grassley, who exposed damaging conflicts-of-interest in the psychiatry field, has shifted his attention to the cardiology field - where cocktails of powerful drugs are being peddled without the backing of convincing published scientific evidence. (The polypill for heart disease comes to mind. It's an untested pill containing a statin, ACE inhibitor, diuretic, aspirin, and others.)

There are many ways that industries influence research. One is by suppressing unfavorable results of industry-sponsored studies. Here's an example using antidepressants:

"Among 74 FDA-registered studies, 31%, accounting for 3449 study participants, were not published. Whether and how the studies were published were associated with the study outcome. A total of 37 studies viewed by the FDA as having positive results were published; 1 study viewed as positive was not published. Studies viewed by the FDA as having negative or questionable results were, with 3 exceptions, either not published (22 studies) or published in a way that, in our opinion, conveyed a positive outcome (11 studies). According to the published literature, it appeared that 94% of the trials conducted were positive. By contrast, the FDA analysis showed that 51% were positive."
- Selective Publication of Antidepressant Trials and Its Influence on Apparent Efficacy, NEJM, 2008

Other ways include:Dr. Angell says that "many reforms would be necessary to restore integrity to clinical research and medical practice. ... Many would involve changes in the FDA." I hope the new FDA Commissioner makes these reforms part of her agenda.
________
Posted by Bix at 8:27 AM

It's encouraging to hear that another well known and respected voice is pointing to rampant corruption in the medical establishment and FDA. Hopefully if enough people recognize this problem, eventually elected officials will act to remedy the problem. We need to remind our elected officials about this problem at every opportunity.

I'm afraid corruption is not just limited to medicine, but also includes agriculture and food administration. NAIS and the persistent and unjustified federal campaign against raw milk are good examples.

Great post! It is sad that research and results can be bought. I agree with the above comment that it is a huge problem within the food industry. I invite you to visit my blog and maybe we can learn from each other!

This is an AMAZING post--it's good to have one's suspicions confirmed, though one would always prefer that things were not this way.

It's really going to degrade the phrase: "Studies show..."

I give a lot of praise to this editor. But there's a lot more room in the confessional! I used to believe 90% of the medical information I read. Now I believe only 10%, and I'm probably reading 50 times more information than I ever did. If the pendulum swings hard enough, it will be a long hard fall off the pedestal for many scientists, researchers, and doctors!

Great post though sadly it doesn't come as a surprise! It's not dissimilar to the influence of the medical insurance companies in the classifying of the neurological illness M.E. as a psychological one!