New Research On Meat And Cancer

The American Journal of Clinical Nutrition published a couple studies on the relationship between meat and colon cancer this month. Here they are. (Keep in mind my previous post, where the former editor-in-chief of the New England Journal of Medicine said, "It is simply no longer possible to believe much of the clinical research that is published," because of industry influence.)
________ 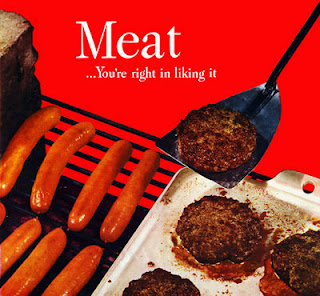 This one was funded by the US National Cattlemen's Beef Association and the US National Pork Board. It looks like the engineering consulting firm Exponent was contracted to run the numbers. It was not an original study, but a meta-analysis, a reanalysis of data obtained from previously conducted studies.

It found no association:

"The available epidemiologic evidence does not appear to support an independent association between animal fat intake or animal protein intake and colorectal cancer."

This one was funded by the Kurt-Eberhard-Bode-Foundation (promotes medical and science research), the European Commission, and German Cancer Aid. It was an original epidemiological study of a German subset (25,540 participants) of the European EPIC prospective cohort.

It found an association. Compounds in cooked meat raised the risk of colon cancer:

"The results support data from case-control studies of a positive association between HCA intake and colorectal adenoma risk." (HCAs are Heterocyclic Aromatic Amines that come from cooking meat or fish at high temperatures.)

"Adenoma risk also increased with the consumption of strongly or extremely browned meat."

Personally? The media has built up such a fear to cancer. "All" foods cause cancer. I'm tired of it. Go to a respectable abbatoir and *ask questions*. Get to know where your meat comes from. Make sure it's local, make sure it's fed properly and not injected with a bunch of crap.

How do we get to the bottom of any association between a dietary component (be it meat, or a preservative in meat, or HFCS, or GMOs, etc.) and disease when interested parties control research? It's frustrating.

(It's a ruse when the beef and pork industry say, "But we didn't write the study." They paid for it. I don't believe if the results showed a strong association between their product and cancer, that they would embrace it and promote its publication. No, as primary sponsor, they'd have the power to suppress it.)

Agreed; they had their little hands in it, either way. It's hard, I see, to find a totally un-biased study. Do they even exist??

Anyone know if their are studies showing the colon cancer rate is among vegans?