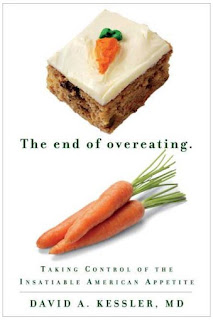 Remember my analogy between the Chinese endorsement of tobacco and the US endorsement of junk food (China Tells Citizens To Smoke), both to make money at the expense of health? I feel vindicated.

"Kessler, 57, sees parallels between the tobacco and food industries. Both are manipulating consumer behavior to sell products that can harm health."

Much like nicotine in tobacco alters brain function, a link the tobacco industry has used to their advantage, Kessler says that "certain foods alter brain chemistry in ways that compel people to overeat."

"Highly palatable" foods -- those containing fat, sugar and salt -- stimulate the brain to release dopamine, the neurotransmitter associated with the pleasure center, he found. In time, the brain gets wired so that dopamine pathways light up at the mere suggestion of the food, such as driving past a fast-food restaurant, and the urge to eat the food grows insistent. Once the food is eaten, the brain releases opioids, which bring emotional relief. Together, dopamine and opioids create a pathway that can activate every time a person is reminded about the particular food. This happens regardless of whether the person is hungry."

"For those like Kessler, the key to stopping the cycle is to rewire the brain's response to food -- not easy in a culture where unhealthy food and snacks are cheap and plentiful, portions are huge and consumers are bombarded by advertising that links these foods to fun and good times, he said."

"Deprivation only heightens the way the brain values the food, which is why dieting doesn't work, he said."

Kessler broke his own food addiction with something akin to a nicotine patch, in this case a fat/salt/sugar patch. He allows himself small doses of these while nurturing healthier behaviors, "food rehab" he calls it.

He also says that the way society views certain foods needs to change:

"What's needed is a perceptual shift, Kessler said. "We did this with cigarettes," he said. "It used to be sexy and glamorous but now people look at it and say, 'That's not my friend, that's not something I want.' We need to make a cognitive shift as a country and change the way we look at food. Instead of viewing that huge plate of nachos and fries as a guilty pleasure, we have to . . . look at it and say, 'That's not going to make me feel good. In fact, that's disgusting.' "

Here he is in a video promotion (that's not him in the bathing suit) for his book, "The End of Overeating: Taking Control of the Insatiable American Appetite":


I liked this part:

so true - junk food is often eaten simply because of the pleasant experiences a person has in their mind of this food, rather than to satisfy their hunger

Just goes to show weight control is so much more than counting calories. It also means eating nutrition food. Real food. Food the way Michael Pollan defines food. We need to move from the highly processed stuff the food industry pushes for profits.

mindless eating by brian wansink, written by a marketing professor helped me understand fathom how the food industry sells more food.
he writes the book offering practical tips, how to beat the food industry - on a daily basis.