What Predicts Survival In Long-Lived Cultures? (Part 1 of 2) 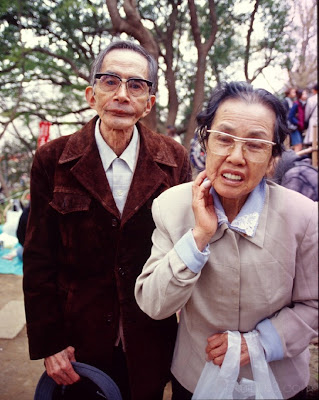 I came across a few studies you might find interesting. I did.

They address three questions. Two of those I'll deal with in this post:

The World Health Organization's 2001 report listed population health for its member states in terms of healthy life expectancy (Healthy Adjusted Life Expectancy: HALE).1 Generally, HALE is the number of years "in full health" that a newborn can expect to live. Here were a few leading HALE nations:

I singled out the 4 at the top because members of their populations were selected to participate in studies that tried to answer questions 2 and 3.

Answers to the next two questions are based on data from the famous FHILL study: "a cross-cultural study to determine to what extent health, social and lifestyle variables collectively predict survival amongst long-lived cultures."
________
2. What lifestyle factors are best correlated with long life?

Health, lifestyle, and diet data (at baseline), and mortality data (up to 7 years) was collected on the following 5 groups (818 participants) in the FHILL study:2Which of the following 8 variables do you think was found to be the most important predictor of a long life?The answer: 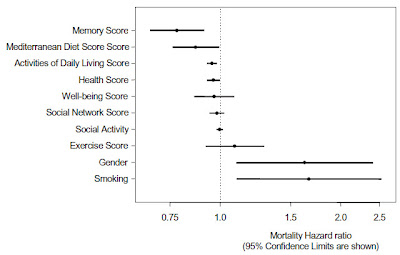 The most important predictor of a long, healthy life was diet.* Although memory score had the greatest impact on risk of death, it's not thought to be as modifiable as diet.

Smoking within the last 5 years had a negative impact (a hazard ratio greater than 1.00) - it shortened life.

The most surprising thing to me was that exercise and social activity weren't found to be significant, at least as they were defined here.

The third question, "What particular aspect of diet is best correlated to long life?" I'll address in my next post.

* The diet score was based on how well a participant's food intake adhered to a plant-based diet, similar to the Traditional Mediterranean Diet (TMD), but which included fish. This TMD score was used because it was shown in prior studies to reduce risk of death in Greeks, Danes, Spanish, and Chinese. A high TMD score in this study reflected a high intake of vegetables, legumes, fruits, nuts, cereals, fish, and a high monounsaturated fat:saturated fat ratio (reflective of a high intake of olive oil), as well as a low intake of milk, dairy foods, meat, meat products, and alcohol.

Photo of Japanese couple from ts's photoblog. There's a pretty moving story about this couple on the page where I found the photo.
Posted by Bix at 4:39 PM

i LOVE fish. we had it everyday growing up (at least once a day). Having being raised in Bombay-- the fish came from the sea. Growing up I did not know what mercury was until I came here. Now I am scared to eat fish.! My family continues to eat without being terrified !

I still buy fish from the Korean market ( wild caught ) but always wonder -- that i have to trust what the shop's information! and how much mercury and where !

But now fish has reduced to once a week ! or sometimes none -- or I'll try and compensate it by eating sushi for brunch on a saturday.

A friend once caught blue fish ( i think ) from the Hudson at least 3 feet in length. And I cleaned it and cut it -- and cooked it.

There are certain communities in India that eat a lot of fish ( Kolis - the natives of Maharashtra where bombay is located. Bengalis in Calcutta and People who reside in kerala. The former 2 are located beside the sea so their fish mostly comes from the sea ( sea fish have less bones ) and the latter comes from the river ( the fish has many bones )

May be I should start writing this down.. there are too many stories to tell :)

Anrosh, I love your stories. I really do.

Yup, the TMD - all things always lead to the Greeks, why is that you think? HA! I know why, they got it all figured out!

Thanks for those facts, just love it!

There's an article in today's Times commenting on various studies of the role of friendship in health & longevity.
http://www.nytimes.com/2009/04/21/health/21well.html?em
I wonder how they defined it in this study that it didn't register as a significant factor?

"All of the variables in the chart were found to impact life expectancy by themselves. Here they were analyzed together for comparison's sake."

The point of their study was to investigate these variables collectively. When they did, they found diet was a stronger predictor of longevity than social activity.

If you were wondering about the questionnaire, I recall reading it for my post. I'll see if I can find it again.

Okay, here it is, Melinda: