I left off in my previous post talking about antinutrients. This is a broad and deep topic. It's a special person who can thrill in the minutia of toxicology. As much as I admit to those kinds of thrills, I'll also admit to feeling overwhelmed at times in class trying to grasp the sheer number of potential toxicants and the unbelievable array of impairments those chemicals can wrest from our bodies. Wow, just wow.

But to keep this short...

"There are components in raw cereal grains which wreak absolute havoc with human health and well-being." ... Besides phytates, "these antinutrients include protease inhibitors, alkylrescorcinols, alpha-amylase inhibitors, molecular-mimicking proteins, etc."

He adds that sophisticated processing technologies only partially mitigate the negative effect of grain consumption.

He lays out a convincing argument.

I have 2 concerns. When we choose not to eat grains, legumes, starchy tubers, and dairy foods, we're left with meat, seafood, fruit, vegetables, nuts, and a few other seeds - all foods promoted in the Paleo Diet.

Concern 1. Virtually ALL plant foods contain some amount of toxin or antinutrient, not just grains (which are seeds of grasses), legumes, and potatoes. Below is a table I swiped from Cornell University's GEO-PIE site.1

If we are to apply the antinutrient argument to the selection of our meals, why not limit consumption of all plant foods? That leads me to my next concern. 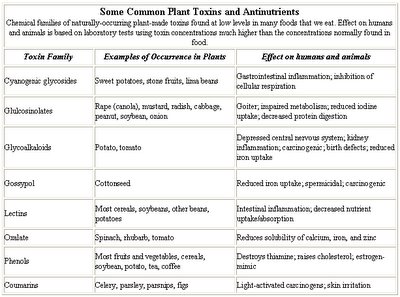 Click for larger.
Concern 2. Animal tissue is also a source of toxins. Just as mercury bioaccumulates in fish (fish higher up the food chain contain more mercury), so chemicals, some toxic, can bioaccumulate in an ecosystem. Below is some text that accompanied the above table:

"Many of these compounds are known carcinogens. Some fat-soluble plant toxins even bioaccumulate - that is, when an animal eats the plant, the toxins collect in animal tissues and pass to humans when we eat the animal - and can be secreted in human and animal milk (for example, solanine from potatoes)." 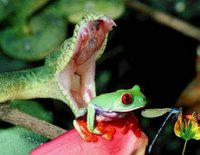 And if it's grain we're trying to avoid, let us not look to our livestock, whose cells are packed with the imprint of the grain used to fatten them. In The Omnivore's Dilemma,

Michael Pollen describes the journey of the unique carbon atoms found in corn as they travel up the food chain:2

"The higher the ratio of carbon 13 to carbon 12 in a person's flesh, the more corn has been in his diet - or in the diet of the animals he or she ate."

In fact, he says, when you compare the tissues of Mexicans, who eat more corn (outright) than North Americans, you find they still have a lower concentration of corn-based carbon 13 isotope in their bodies than we do. Our corn-fed cattle, and our consumption of same, are contributing to claims such as Todd Dawson, a Berkeley biologist made in reference to our corny tissues, "North Americans look like corn chips with legs."

Given the plethora of harmful compounds that Cordain describes reside in cereal grains, I shiver to think what amount of them may be accumulating in the flesh of our grain-fed livestock.

If we are to apply the antinutrient argument to the selection of our meals, why not limit consumption of animal foods as well as plant foods? (Let this be one more argument for pastured livestock.)

The Paleo Diet shows the potential of being the mother of all weight loss diets.

I've asked myself the same questions. Until very recently I thought of all meat as being with the paleo diet, but now I realize that eating grain-fed meat is just as bad as eating grains. The answer to that problem is just to eat only grass fed, free-range meat. In terms of plants, it's obvious to me that fruits and true nuts are meant by the fruit or nut-bearing plant to be eaten as a means of seed-dispersal, so they cannot be ruled out. On the other hand, eating a root vegetable (e.g. carrots) or all of a vegetables leaves (e.g. spinach) kills the plant, so one could see why these plants would evolve harmful toxins to prevent us from eating them. Yet many paleo-bloggers promote root-vegetable consumption, since carrots et al also have a lot of nutrients in them.