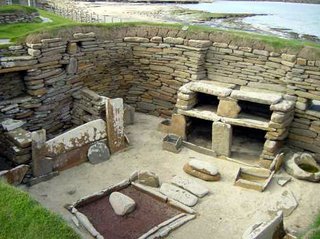 Getting back to the diet that shuns grains, legumes, and potatoes...

There are so many points to consider here, pro and con, that I think I'll take them one at a time.

(I'll try to hold my thinking to how these points might effect what we eat today, right now, for breakfast. Many of Cordain's contentions are so loaded that a meaty discussion of them is sure to elicit explosive tangents and "You're so full of s**t!"s - or to use Melinda's more cordial term, "academic infighting", when all I want to know is what to eat for breakfast.)

"Until the advent of regular fire use and control (as evidenced by hearths ~125,000 years ago) it would have been almost virtually energetically impossible for our species to consume cereal grains to supply the bulk of our daily caloric requirements."

Melinda counters that fire use may actually date to 1.42 million years ago, as evidenced by, among others, hearths uncovered at Oldowan sites in Africa. (She references a book, The Lost Civilizations of the Stone Age

The difference there, ~1.3 million years, is important since it might have allowed time for man's genes to evolve sufficiently to consume cooked grains.

Grains must be heated for them to be a viable foodstuff. Yet even when heated, according to Cordain, "cooked cereal grains wreak havoc on the primate gut because of [their] high antinutrient content."

Fast forward to breakfast. Here I have my fire-breathing hob and a bowl of dry, rolled or steel-cut2 oats. According to the Paleo Diet, I am discouraged from cooking and eating my oats since my genes have not evolved in the time, anywhere from 1,420,000 to 125,000 years, that the forebears of my genes needed to make oats edible. Hm.
________
1 Photograph is of an ancient living area with hearth as centerpiece. It's part of the Skara Brae Neolithic settlement in Scotland that was excavated in the early 1930s. Wikipedia notes the date of habitation from about 3100 BC, and says, "On average, the houses measure 40 square metres in size with a large square room containing a large hearth which would have been used for heating and cooking." Nice shelves.

2 Thanks to Constance, I bought a box yesterday.