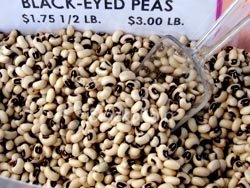 The answer to the question in the previous post is folate. You might be more familiar with it as folic acid1, the version of the vitamin included in supplements.

Before I leave the folate topic, I wanted to say just 3 things - 500 words or less, I promise.

How Much is Too Much

The established safe upper limit (UL) for folic acid is 1000 micrograms/day (1000 mcg/d, same as 1 mg/day). Intakes above this amount have been associated with mental changes, sleep disturbances, gastrointestinal problems, hypersensitivity, and neurological damage - especially when folic acid intake masks a vitamin B12 deficiency.

Most multivitamin or B-complex supplements (folate is a B vitamin) contain at least 400 mcg/pill, the current DRI for folate for most adults.

Neither the supplement nor the fortified grain product accounts for the amount of folate provided by a healthy diet - one high in fruits, vegetables, beans2, and whole grains - which contribute several hundred micrograms more (about 250 mcg folate average).

You can see how easy it would be to reach the upper limit, especially if you take a supplement.

The Ethics of Fortification

I get a little antsy when the government decides to add chemicals to the food supply. Granted, in the case of thiamin, riboflavin, and niacin, the benefit to large groups of people has been undeniable. However, enriching processed flour with those 3 nutrients is more a case of adding back in some of what is lost when the bran and germ are removed during processing of the wheat kernel. But inclusions of iron, calcium, vitamin D, folic acid, etc. to flour ... it gives the term "wonder" in Wonder Bread new meaning.

I'm not an advocate of heavy supplement use. Curiously, the authors of the vastly popular 1982 book Life Extension, Durk Pearson and Sandy Shaw, who are advocates of the liberal use of supplements made their position known to the FDA back in 1993 before the fortification regulation passed:

"Pearson, Shaw, and quite likely the entire medical profession in the free world, consider it unethical to medicate a conscious and mentally competent adult without first obtaining that adult's informed consent."
- Suzanne White Junod, Writing for the FDA in Folic Acid Fortification: Fact and Folly.

Ten years ago, folate deficiency was a real concern. Now, at least among certain groups, folate intake has possibly overshot the optimum mark.

Ireland, the UK, Australia and New Zealand are all wrestling with the idea of fortifying their flour with folic acid. None have passed the regulation yet. I don't believe that any country in the EU currently mandates fortification. Citizens' groups lobby against it because they claim it interferes with consumer choice. Some manufacturers are also fearful. A spokesperson for George Weston Foods, a top Australian baker, expressed concerns about the risks of overconsumption:

"Legal opinion shows that if government gets it wrong, industry will be liable."
- Folic Acid Debate Rages in Ireland and Australia

~~~~~~
1 Folic acid vs. folate: Folic acid does not occur in nature in significant amounts; however it is more bioavailable than folate which occurs naturally in unprocessed foods.
2 Besides liver, cooked beans are probably the best natural source of folate. A cup of cooked black-eyed peas provide about 360 mcg folate, almost the day's requirement.
Posted by Bix at 2:20 PM