This exquisite flow chart came from an article in the July 2, New York Times,
A Sweetener With a Bad Rap.
It's the process from which we derive this: 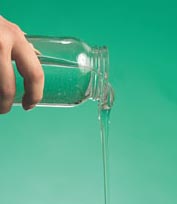 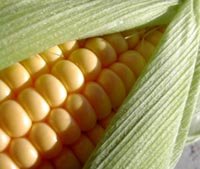 It's a process that doesn't look like it would occur spontaneously in nature. So, no matter that the FDA has decided to allow companies to advertise products which contain HFCS as "100% natural" or "all natural", I don't consider them natural (especially when lots of corn in the US is genetically modified). And since my personal consumption goal is to eat as closely to nature as is possible1, or at least is reasonable, I shun foods that are made with HFCS whenever I can.

Fructose Is Not The Bad Guy

That said, I don't believe the fructose in "high fructose corn syrup" should be maligned as much as it is. HFCS may, in my mind, be an unnatural substance, but fructose isn't. It's found naturally in fruits, honey, and some vegetables. Its sweetness is nicely attractive to the human tongue and psyche. I can imagine my ancestors, the ones who lived thousands of years ago, salivating as they plucked a berry and being rewarded for their keen sense of foraging. And I suspect the serpent in the Garden of Eden would have had a hell of a time getting Eve to take a bite of celery instead of apple. Fructose tastes good, baby.

Now, it's true that high intakes (amounts over 50g) of fructose can be difficult to absorb, leading to gas, bloating, cramping, diarrhea, and other generally uncomfortable GI symptoms. It's true that ingestion of fructose has been found to increase levels of serum triglycerides. And knowing the unique way fructose is metabolized in the body, especially by the liver, I wouldn't be surprised to see findings that implicate it in liver impairment. But none of these undesirable outcomes of fructose intake should come into play if the monosaccharide is consumed in moderate amounts - quantities found in a couple peaches, a handful of blueberries, and a teaspoon or two of honey.

It's In The Numbers

Where a medium peach has about 1.5g of fructose, a "small" 16 oz. HFCS-sweetened carbonated beverage can have about 25g of fructose, not counting the amount freed from its sucrose2, another sweetener added to soda. Add a burger to that small beverage, whose bun and condiments are HFCS-sweetened, and a bite or two of any prepackaged HFCS-sweetened dessert, and you'd be a wise fellow indeed to have a route mapped out to the nearest bathroom.

There's an oft-cited article3 that links the consumption of HFCS to obesity. But I wonder if you replaced all our HFCS with plain old sugar, it would significantly impact the obesity prevalence in this country. That would be a telling bit of research.

~~~~~~
1 For a myriad of reasons, environmental, political, economic, as well as reasons that have to do with my health.

3American Journal of Clinical Nutrition, 2004, "Consumption of high-fructose corn syrup in beverages may play a role in the epidemic of obesity".
Posted by Bix at 1:50 PM