They Got 'Em All 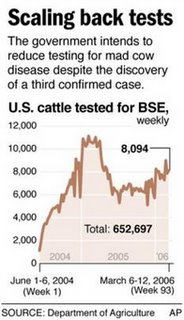 Pursuant to the discovery of the third confirmed case of BSE in 27 months, the USDA has sent signals that it has decided to go ahead with plans to scale back testing.

US cattle herd: 95 million, of which 40 million are slaughtered each year. That chart on the right would show a more accurate perspective if the y-axis stretched to 40,000,000 not 12,000. But then you might not notice the blip that represents cows tested.

"This would be a tenth of a percent of all animals slaughtered. This starts to be so small that in our opinion, it approaches a policy of don't look, don't find."
- Jean Halloran, director of food policy initiatives at Consumers Union

~~~~~~
1 Source: US Congressional Press Release, Jan 2004, from Congressman George Miller (D-California) who proposed testing all cows slaughtered.
Posted by Bix at 9:00 AM