US Works to Reassure Japan on Mad Cow

"WASHINGTON -- The Bush administration is trying to reassure Japan and other foreign customers of American beef while awaiting further tests on a suspected case of mad cow disease."

How about a little homeland reassurance, guys?

Who wants to wager that even if bovine spongiform encephalopathy is confirmed in this cow, it will be written off as a random, isolated case from an animal whose flesh never made it into the human food chain? 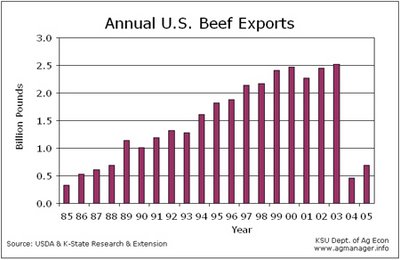 "Public health is not at risk for the fatal brain disease because the infected cow did not enter the food chain, federal officials say."

I guess that's settled.
I have to side with the commenters. Since cows get BSE from eating infected flesh of other cows, where are all the cows that ate the infected feed that this cow did? Not in the food chain, right?
Posted by Bix at 7:52 AM