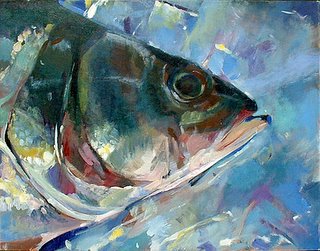 Doug asked me a question that I decided to answer here in a post. It was getting a bit long for the comments section and I thought maybe others would find these intricacies of interest:

Q. "Fanatic, what are the best vegetables for omega-3s? I've been drinking a lot of freshly made vegetable juices lately -- cucumber, spinach, kale, carrots, beets. I wouldn't mind upping my omega-3s, and I'm a bit nervous about drinking fish oil. (Does it smell fishy?)"

A. I don't know anyone who takes fish oil that doesn't revisit (burp) that fish oil to some degree later. And yes, it smells like fish. Some manufacturers add peppermint oil to disguise the taste, but it really just adds to the sensation instead of masking it (minty fishy burp).

Your practice of drinking fresh vegetable juice is commendable! Keep it green (esp. members of the cabbage family), add some flax seeds, and if you dare, clove, oregano and mustard seeds, and you'll be drinking a veritable omega-3 tonic.

There's one drawback to depending on vegetables as your omega-3 source. The type of omega-3's that exist in plants (alpha-linolenic acid: ALA) must be converted to longer chain EPA and DHA in our bodies before they have effect. And here's the clincher, our bodies do very little of that conversion when there's a lot of omega-6 present, since both omega-3 and omega-6 compete for those conversion enzymes.

So if your ratio is, say, 20:1 (heavy on omega-6) and you're a vegetarian (that is, you're not getting EPA and DHA directly from animal foods - it is primarily animals that make the enzymes to perform the conversion to EPA and DHA, not plants), I would guess that your EPA/DHA stores are low and that your omega-6s are sucking up those conversion enzymes and placing you in a pro-inflammatory state - setting you up to develop or exacerbate many 20th century chronic diseases. That would be my guess :)

"... it isn't just that we're not getting enough omega-3. It's that we're simultaneously getting too much omega-6."

So for vegetarians or people who are fish-averse, it becomes vital to decrease omega-6. Most margarines and packaged prepared foods (cookies/crackers) are full of it. I would shun the oils mentioned in my previous post and replace them with extra-virgin olive oil. Keep in mind that even though soy, canola, and walnuts are sources of omega-3 (ALA), they contain proportionately more omega-6.

If you decide to take fish oil, here's a tip from a user I know. Down it just before you eat a meal. The food you layer on top of it in your stomach cuts down on fish-burp.