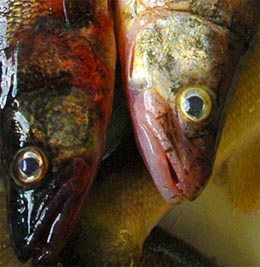 While I was away, this series of articles appeared in the Chicago Tribune (You'll need to register, but it's free, easy, and worth it, especially for that fish calculator):

This is one big fish. The mercury contamination seems to be bigger than imagined, certainly bigger than the government has let on. I'm sure the media were all over this news. (Were they?) Regardless, here's my contribution for keeping this fish story afloat.

Fish: Why We Can't Live Without Them

Fish, especially cold-water, oily fish, are our last great hope in maintaining a respectable, if not necessary, omega-6/omega-3 ratio in our bodies. That ratio has crept from 1:1 several thousand years ago to an astonishing 20:1 today (in the US). And that lopsided ratio - heavy on the omega-6, light on the omega-3 - is now thought to be a major contributor to today's increase in inflammation-related chronic conditions ... asthma, arthritis, heart disease, lupus, MS, even cancer and mood disorders. Why? Because omega-3 fats are the precursors to anti-inflammatory compounds in our body.

You see, it isn't just that we're not getting enough omega-3. It's that we're simultaneously getting too much omega-6. And omega-6 fats are precursors to pro-inflammatory compounds in our body.

Why are we getting so little omega-3?

2. Cows and chickens and fish also make omega-3 compounds (EPA, DHA) from omega-3-containing vegetable matter. Most livestock are eating less of that vegetable matter. So, when we eat their flesh, we fail to get the EPA and DHA that our human ancestors got when they ate their flesh.

The grains we're feeding our livestock, e.g. corn and soy, are heavy on the omega-6 and light, if nonexistent, on the omega-3. (A chicken that's advertised as "Fed an organic, all-vegetable diet!" is no better.) Animals that are allowed to pasture and are grass-fed instead of grain-fed consume a diet lower in omega-6 and higher in omega-3. That's better for the cow and better for the human that eats the cow.

Until recently, fish were the only regularly consumed animal not force-fed a grain-heavy diet. That's why fish and fish oil are touted as being high in omega-3. They are! But that could change if we corral fish into farms and force them to eat cornmeal and soymeal too. It's not that fish are a miracle food.

Why are we getting so much omega-6?

You might have deduced that we, like the cow, are eating a grain-heavy diet. You'd be right. We're also eating a lot of the oils from grains and other omega-6-rich foods - corn oil, soybean oil, canola oil, safflower oil, sunflower oil, peanut oil, etc. Even walnuts which have that "High in omega-3!" label are actually higher in omega-6 fatty acids than omega 3's.

How to improve our omega-6/omega-3 ratio?


Fish: Why We Can't Live With Them 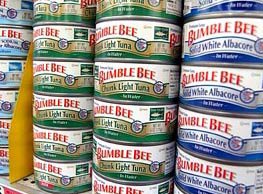 The single greatest source of mercury in our diet is fish. And, according to the NIH Division of Safety:

"Elemental (metallic) mercury and its compounds are toxic and exposure to excessive levels can permanently damage or fatally injure the brain and kidneys."

Now, let me return to the Chicago Tribune's investigative report on mercury in fish.

In summary:It's really a landmark investigation. Kudos to the Tribune. I recommend a peek at the article. Even if you don't have time to read the stories, there are some nice graphics and a handy interactive fish-consumption calculator.

So, do we eat the fish (canned tuna included) and deal with the high mercury levels? Or do we shun the fish and deal with inflammation-based diseases? It's not a pleasant choice.
Posted by Bix at 1:25 PM