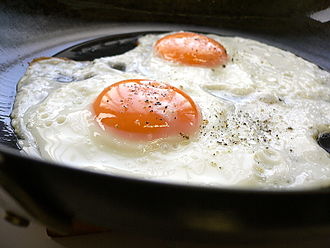 The topic of eggs came up recently. It reminded me of this older study from the American Heart Association:

Rhesus monkeys were fed a high-fat diet containing either 0, 43, or 129 micrograms/kcal of cholesterol a day for 18 months. There was a cholesterol-free control group:


After 18 months, addition of dietary cholesterol increased plasma cholesterol in all groups; increases were evident within the first 2 weeks:


Since Group 3's total cholesterol rose so high, they were excluded from further analysis.

"Clearly elevated lesions [on the aorta] were positively identified only in the [cholesterol-fed] monkeys."

"The [cholesterol-fed] monkeys had more intimal thickening expressed as cross-sectional area than did the control group. ... The involved areas contained significant fibrous and lipid elements. Foam cells were seen to a variable and sometimes prominent degree."

"The monkeys fed the higher amount of dietary cholesterol showed an increase in hepatic [liver] cholesterol."

"The fact that lipid absorbed from the gut enters the arterial wall is well established." (They discussed this.)

This first photo, Figure 5, was from the group receiving the human equivalent of 86mg cholesterol, or what you get in about a half of a small egg. I was surprised there was this much narrowing in just 18 months: 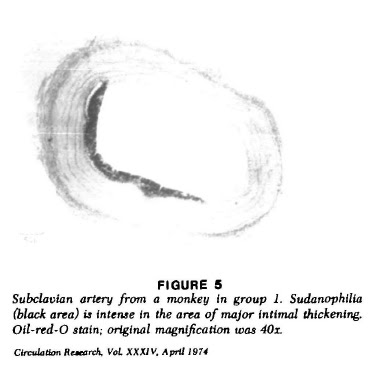 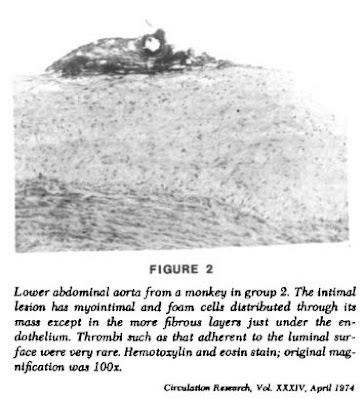 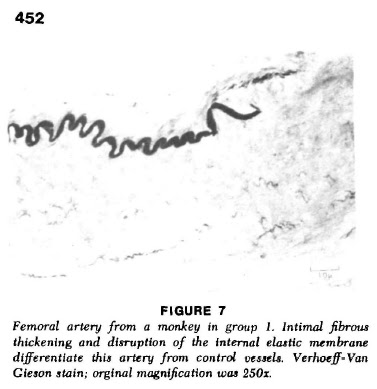 This point was notable:


"The regimen for group 1 was originally designed to demonstrate a null point of the effect of dietary cholesterol on the arterial intima. However, such a point was not found; no threshold for dietary cholesterol was established with respect to a putatively adverse effect on arteries."

They thought that Group 1 monkeys, who received the smallest amount of dietary cholesterol (equivalent to about 86mg cholesterol/day for humans), would not experience adverse effects. They did.

I have been following website www.lowcarbdownunder.com.au. Cholesterol is discussed as is vLDL, LDL, tryglicerides and HDL. just found your blog and this particular post. I am trying to connect the two discussions and seek better understanding. enjoying exploring your blog. looking for new thoughts posted on uptake of LCHF and grain free eating. cheers, Kas